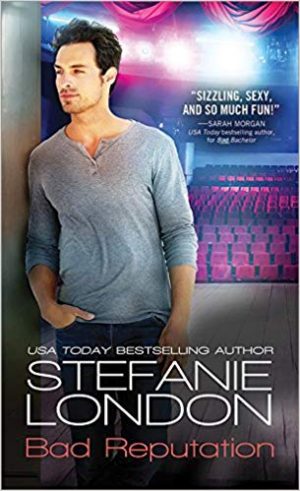 Remi Drysdale, and I won’t spoil what “Remi” is short for, comes from the world of ballet.  It is her first love.  When professional and personal scandal ruin her career, she flees her home in Australia for New York City.  She makes friends with librarian Darcy Greer (Bad Bachelor) and Annie who help and support her as she begins life anew.  Remi keeps her strength and flexibility up by teaching barre exercise classes.  She uses the exercise studio to dance on her own time. It’s an uncomplicated life, but one that falls short of her ballet dreams.

Unlike Reed McMahon from the first book in the Bad Bachelors Series, main character Wes Evans does not have a bad reputation.  In fact, the women of New York are singing his praises all over the controversial Bad Bachelors app. He’s described at being the kind of date and lover to which all others will be compared.  It doesn’t hurt that he’s so well-endowed that he gets nicknamed “The Anaconda.” That is the heaviest snake in the world and the second longest just behind the reticulated python—in case you were wondering.  The problem is that Wes works in the ultra-traditional, conservative ballet world.  He comes from one of ballet’s most elite families.  Wes has made the brave and terrifying decision to strike out on his own, producing and directing his own, non-traditional dance production.  His investors don’t like that his sex-life, good or bad, is being talked about all over Manhattan.  In his case, not all publicity is good publicity.

When Wes meets Remi, sparks fly from the moment they make eye contact.  When he casts Remi as the lead in his new production, the stage is set for new scandal, a scandal that neither of their careers can sustain.  London has multiple layers of plot and conflict within Bad Reputation, but my favorite inclusion was the input of Remi and Wes’ respective mothers. One is hippie sweet and the other is cold and calculating. Both are a problem for the couple and the production. Both are wonderful in their own way.  London also produces an actual “bad guy” in this story that I wanted to slap silly.

The ending is a little lack-luster, but it’s very sweet and puts a satisfying bow on the whole package. Overall, I very much enjoyed this read.

The third book will, by default, focus on the third friend in this trio, Annie.  Annie’s character has been the least present in the first two books, but the most controversial. I’m anxious to see how the Bad Bachelors app will affect her storyline. I hope London does something really spectacular with her book to wrap up the trilogy.

It’s true, Wes is well-endowed.  But everything else is a huge misunderstanding…

Wes Evans, son of Broadway royalty, just wants to achieve something without riding his family’s coattails. Too bad the whole world is talking about his sex life after the notorious Bad Bachelors app dubs him “The Anaconda”. But when he sees a talented ballet dancer, he knows she is exactly what he needs to make his show a success.

Remi Drysdale only had one thought when she fled Australia for New York—never mix business with pleasure again. Ever. Working with Wes is the perfect chance to reclaim her career. Remi promises herself not to tangle with the guy who holds her career in his hands…no matter how enticing his reviews are on the Bad Bachelors app.