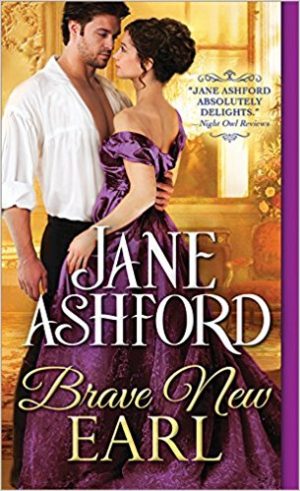 Jane Ashford writes a lovely story full of charm and wit about how two broken people are able to help each other heal. Benjamin is a widow with a young son unable to find healing after the death of his wife. Jean is a feisty countess who after suffering years neglect as a child refuses to allow neglect of a child happen on her watch. Together they learn that love can heal a myriad of wounds.

The chemistry between Benjamin and Jean is evident from the moment their strong wills collide into one another. Jean is a force to be reckoned with and promptly turns Benjamin and his entire household on their ear which is exactly what is  needed. Benjamin is so lost in mourning his wife that he can’t even see past his own grief to the needs of those in his care. Since Benjamin refuses to allow his son to leave his care and Jean refuses to leave until she knows little Geoffrey is being well tended too it sets up a perfect position for Benjamin and Jean to get to know and learn from one another. Their strong personalities allow for great dialog and plenty of tension as things build up throughout the story.

I enjoyed the seduction of Benjamin and Jean and felt as if there was just enough description in the bedroom for a reader to know exactly what is going on without it becoming overly detailed and leaving nothing to the imagination. Ms. Ashford gave us just the right balance of wondering what was happening and knowing exactly what was going on. I felt the best written and most seductive scenes were of the hero and heroine simply kissing, which in my opinion takes far more skill then simply giving it all away.

The secondary characters are also well written providing a perfect backdrop and just enough color for Benjamin and Jena to shine in the story. They offer the perfect balance to the tension between Benjamin and Jean and fill in gaps in the story line as needed offering strong insights and plenty of laughs.

I only had two issues with the storyline; one for a period romance we get very few indicators of where we are in history. We are told at one point that “the war is over,” but outside of that and the use of titles we really have no clear picture of where we are in history. This caused a struggle for me to believe everything I was reading, especially in reference to Geoffrey. Which leads me to my second issue: Geoffrey. We are lead to believe that Geoffrey a precocious child who has been pretty much ignored by his father his entire life, and yet the minute he walks back in Geoffrey offers little push back to the idea and all but hangs on his every word. I understand that children crave love and attention from their parents but this seems a stretch from a strong willed child that has been allowed to run free for at least five years. Add that to the stunt he pulls at the end of the novel, and it all feels fairly far-fetched given the supposed time period we are in. Maybe that is why Ms. Ashford doesn’t strictly define the book’s time period, I don’t  know, but it left me feeling confused and irritated at the end of an otherwise delightful novel.

All in all, I enjoyed my time with Benjamin, Jean, and company, and if you’re able to suspend the belief that we are knee deep in the Regency period, I think you too will enjoy The Brave New Earl as well.

Widower Benjamin Romilly, Earl of Furness, has given up hope of finding happiness. His wife died in childbirth five years ago, leaving him with a broken heart and a child who only reminds him of his loss.

Miss Jean Saunders is a cousin by marriage. She doted on Benjamin’s late Countess, and can’t bear it when she hears rumors that the Earl is too bereaved to care for his young son. She arrives on the scene to evaluate his fitness as a father, and if necessary, to take his son away.

Jean’s sudden eruption into the Earl’s household simultaneously infuriates and invigorates him. She may be the only person who can breathe life into his neglected home―and his aching heart…