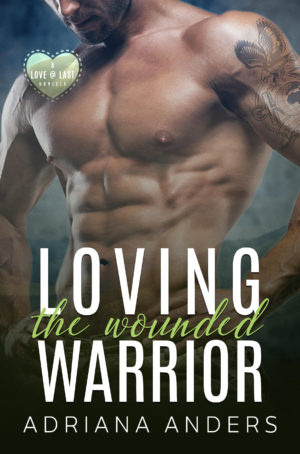 As a “scrappy young” reporter, O’Neal Jones has taken on her share of unenviable stories. But, her job becomes downright awful when, while covering the environmentally unsound introduction of wild turkeys into a national park in Washington State, she nearly runs into a man pushing a wheelchair up a mountain. She has no business latching onto the guy, especially after he’s made it clear he wants to be left alone, but she knows he has a story worth telling—and she knows herself too well to think she could ever let it go.

Retired Gunnery Sergeant Kurt Anderson could have lived a charmed life. Once a high school “golden boy” football star, he had everything going for him: popularity, a scholarship, a fiancée… Now, he’s on an entirely different journey—one that’s coming to an end far too quickly. Spending the last night of it with the woman who turned all those earlier plans upside down isn’t exactly on his “to do” list. Still, with nothing else to look forward to, does it make any sense to tell her no?

Having enjoyed the supporting role O’Neal played in the first story in this series, I was very interested to find out more about her in Loving the Wounded Warrior. As she’s a free-spirited and tough-as-nails reporter, I expected–and got—a lot of frank discussion and perseverance. I just didn’t anticipate being so put off by her initial pursuit of Kurt for a story. The situation quickly became a case of Do the ends justify the means?, which never really did feel okay to me. There were several moments that troubled me, but it wasn’t too difficult to refocus on the other important points of the narrative.

My favorite parts of Loving the Wounded Warrior resided almost entirely in Kurt’s story as told from his POV. He is lost and thoughtful and full of regrets, and I felt that his momentum in the face of his own uncertainty provided some of the best moments in the novella. Additionally, they provide a focus for the sweeping need for more assistance from our government for our military veterans, as well as a reminder that the injuries that can’t be seen on the surface are just as harmful than those that can. I also appreciated that Kurt took ownership of his story in the end, which, in turn, allowed him to help himself.

Overall, I found Loving the Wounded Warrior to be a solid addition to the Love at Last series. While some of my misgivings lingered, the author made quite a few good arguments regarding existing problems in the system that need to be addressed. And, though it felt a little forced after the rest of the narrative, I liked O’Neal’s rejection of certain of society’s other strictures, too. With these first two novellas being expanded retellings of previously released stories, I’m very interested to see what the author might have in store for us next.

She was my best friend’s little sister—and the woman who ruined my life.

O’Neal Jones was the last person I expected to run into on this mountain in the middle of nowhere.
I wanted her, even if it was a bad idea.
But this thing between us was dangerous. It tore through flesh and bone to sear my soul.
Then, in the course of one night, she worked her way into my tent and my sleeping bag…
The question was, could I heal my wounds enough to let her into my heart?

Reviews in the Series:
Loving the Secret Billionaire by Adriana Anders (Love at Last #1)