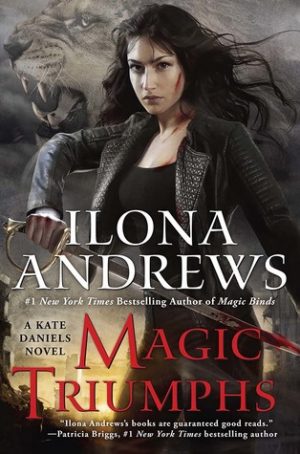 Magic Triumphs is an emotional read that brings a satisfying end to the Kate Daniels series as we know and love it. It is filled with the typical Kate shenanigans, but it’s so much more. The authors don’t short change long-time fans, nor do they force events or add in characters just to up the ante for the swan song. Yet, they still manage to do just that. Friends, family, and enemies all show up in various parts of the story to help bring about the conclusion to my all-time favorite series.

But let’s not just jump to the end of this epic tale. Magic Triumphs is its own story. Taking place about two years after the conclusion of Magic Binds, the book introduces us to Conlan, Curran and Kate’s mischievous toddler. Although mostly human, he’s an unknown because of his unique and powerful lineage. This makes him a target, and Roland sends his elite forces into Atlanta to hunt down both Conlan and Kate. This provides constant action which brings out the best in Curran and Kate. I love watching the two develop their parenting style based on the constant danger surrounding their lives. Whereas the addition of a baby can tank a series, or the child gets relegated to a background character, Conlan is important in his own rights. He demonstrates the evolution of power, along with the possibilities of the future – both evil and light. His character also helps the continuing development of both Kate and Curran. In their love and what they are willing to go through for their son, we see both Kate and Curran become even more.

The battle with Roland is one of the primary focuses of Magic Triumphs, but it’s a complex issue. The authors bring the long-looming war to a head, but in a less-than-direct route. I actually love how it all goes down, leaving me completely satisfied. As far as open storylines and loose ends, most are closed, but there are a few threads left open for possible future spinoffs. The obvious being Hugh d’Ambray, whose Iron Covenant series still has a couple of stories scheduled. The authors do a fabulous job weaving Hugh and Elana’s storyline into Magic Triumphs. Do you need to read Iron and Magic before this book? No. However the book provides a foundation for one of the bigger storylines within Magic Triumphs. I am left wondering what will be next for Hugh and Elana – whether their next book will fill in gaps between Iron and Magic and Magic Triumphs, or if it will pick up the current timeline.

Per usual, Kate’s book is filled with laughter, tears, and heart-warming moments. These emotions are magnified a hundred times over knowing this is the final book in the series (or maybe just “story arc”?). I did cry a few times, but I laughed even more. One of the best moments for me was about a third of the way in when a deadly threat is uncovered and Kate’s dead Aunt Erra makes an impassioned plea to Kate. Reading it emphasized how much Erra and Kate have changed over the series, showing such growth and maturity in their characters – something that is mirrored in many of the characters.

In the end, Magic Triumphs is nearly the perfect conclusion to the Kate Daniels series. I loved taking this final journey along side Kate. It wasn’t easy, but it was amazing. The duo that is Ilona Andrews has created such an incredibly written, well-researched, amazing world, that it is hard to say good-bye. Every book has been top-notch, with many notable moments. I will continue to read and listen to these books time and time again.