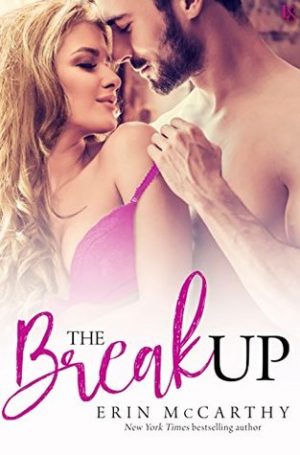 The Breakup didn’t feel so much like a second book as it felt like, as Paul Harvey would say, “the rest of the story.”  The Hook Up, book one in the Jordan Brothers series followed Cain Jordan and Sophie Bigelow and there is a one month gap before that book concludes.  The Breakup, following Cain’s twin brother Christian and Sophie‘s older sister Bella, fills that gap and continues to its conclusion. This is definitely a read in order series, even if it’s only two books.  There are, however, more Jordan brothers and this is likely not the end.

I didn’t want to like either of these characters so it took me quite a while to warm up to both of them.  Both of them had been problematic in the first book and their personalities were a little exaggerated as seen through other people.  As we get to know them and their own story, it took a while for me to thaw, but I did get there.

The story begins very hot and heavy, there’s no long lead up.  As the title indicates, Bella dumps her fiance and shacks up with Christian having lots and lots of revenge sex while she hides from the consequences of the breakup.  Christian sums it up though when he reminds himself, “I couldn’t take on her problems and she couldn’t take on mine.  And neither of us wanted that anyway.”

Yet they don’t seem to be able to stay away from each other. There’s a surprise plot point that I won’t spoil, but once it happened, it seemed the most logical thing to happen in this whole book. Because this story was the answer to, “What the heck happened?“ in the first book, it felt less complete. The conclusion is very abrupt.  We get our HEA in a matter of two pages, then “The End.”  I had whiplash. I didn’t uncoil for the brief epilogue. I wanted more of both. I hope we get some of that in future books about the rest of the Jordan brothers.

Can two wrongs feel oh-so-right? This bride is about to find out—with the bad boy who makes an epic breakup worth her while.

Bella: I know I’m a princess. I’m used to getting what I want. But all I ever really wanted was a husband and a family. Unlike my sister, Sophie, I’ll never have a brilliant career to fall back on. So what’s a bride to do when she learns that Prince Charming is a cheating snake just a few days before her fairy-tale wedding? With my fiancé begging for another chance, the only way to save the wedding is to even things out with a little revenge sex—and local bartender Christian Jordan seems like the right man for the job.

Christian: If gorgeous Bella Bigelow thinks sleeping with me will somehow lead to happily ever after, I’m not going to turn her down. The guy she wants to marry is a jerk, and her sister is fooling around with my estranged twin brother, Cain. So what’s the problem—besides falling for a woman who doesn’t know what she wants out of life? All I want to do is whisk her away from that church, take her to a cabin in the woods, and act out all our naughtiest fantasies. And I may just get the chance. . . .

Reviews in the Series:
The Hookup By Erin McCarthy (Jordan Brothers #1)