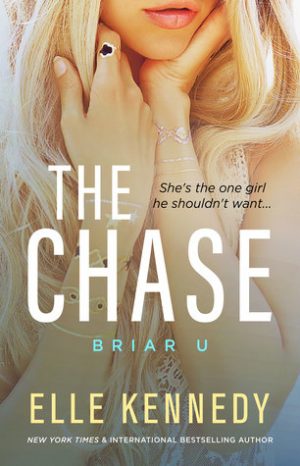 Phew!  *Slaps desk*  Done!  I really do try to take my time and savor books from authors I love, but Elle Kennedy made that impossible with The Chase, the first book in the Briar U series.  It’s her main character Summer Heyward-Di Laurentis’ fault.  At first glance, Summer is a wealthy, wild, entitled child who invites drama and leaves chaos in her wake.  Because my brain has to cast the movie of every book I read, Summer was Summer Huntzberger from the Gilmore Girls.  Kennedy’s Summer is so much more though, and as a GG devotee, that’s saying a lot. She very quickly became her own person, more like Elle Woods. You can hear her say, as Summer does, “I will forever strive to be Coco Chanel, and I will forever fail because nobody can be Coco Chanel.”  Summer has ADHD and a frenetic energy that pushes the reader forward, forward, forward… It would have been easy to write her character in cliches, more like the GG version I started with.  Instead, utilizing the he said/she said style of the series, the reader sees her real life, real feelings, and struggles to interact with her world.  Kennedy does right by a diagnosis that is sometimes used as a dirty word or a catch-all for kids with a lot of energy.  For Summer Heyward Di-Laurentis, it’s truly about how her brain is wired.  In fact, her inner voice practically becomes another character in this already complicated love story. Summer admits, “My inner critic is, frankly, a total bitch.”  Living in Summer’s brain is exhausting for Summer, her roommates, her family, her professors, the reader, and Fitz.

Poor Fitz.  We fell in love with him in the Off-Campus series. He’s drawn to Summer, but has no desire to court any of her drama.  Colin Fitzgerald does not do drama.  As he, Mike Hollis, and Hunter Davenport, the next class of Briar University hockey demi-gods, move into the same off-campus house Garrett, Logan, Dean, and Tuck have vacated after graduating in the Off-Campus series, they are short one roommate.  Summer has recently been expelled from Brown University and her father calls in a favor to get her into Briar.  When her sorority refuses to let her move in to the sorority house, Dean arranges for her to be the fourth roomie.  To quote Maurice Sendak, “Let the wild rumpus start!” None of her new roommates is entirely sure what to do with her, all of them would like to sleep with her.  That makes for awkward living arrangements.

In The Deal, Logan was a tortured soul, coveting after Garrett’s girlfriend Hannah.  In The Chase, Hunter is more than a wistful on-looker.  He actively pursues Summer when Fitz just can’t make up his mind about what he wants to do with his attraction to Summer.  As Hunter chases Summer and Summer chases Fitz, and Fitz chases peace and control, as Summer chases her degree, and Fitz chases his career goals, the reader is running to keep up—and I loved it. The reader is almost like the house itself, witnessing the coming and going of all this drama.  It made me think of the 1948 classic film “Enchantment” with David Niven and Teresa Wright.  In this film, the house is the narrator covering two generations of family histrionics.  What would the house say about all of these Briar students and their love lives? It’s the common denominator in all these books. That’s a movie I would pay to see and the reason we hope Kennedy continues this slice of campus life for a very long time.

One critizism.  One.  Can we please be done with exploding ovaries?  I don’t know who started it, but if I never read that reference again it will be too soon. Okay, two.  Two criticisms.  “Tummy” is a word that belongs to bouncing babies and kindergartners with the stomach flu. For me, this is up there with “moist” and other cringe-worthy vocabulary.  It just doesn’t belong.  Twenty-something’s having dirty adult sex shouldn’t get flutterings in their tummy.  Ok.  Rant over.  For real, ignore those references and go buy this book.  Try not to finish it in twenty-four hours.  Do your laundry and eat something nutritious.

Kennedy’s website is already taunting us with book two, titled The Risk, set to release in February of 2019.  I hate winter as much as Tuck’s Texas mother, but at least I’ll have something to look forward to in the cold depths of winter.

Everyone says opposites attract. And they must be right, because there’s no logical reason why I’m so drawn to Colin Fitzgerald. I don’t usually go for tattoo-covered, video-gaming, hockey-playing nerd-jocks who think I’m flighty and superficial. His narrow view of me is the first strike against him. It doesn’t help that he’s buddy-buddy with my brother.

And that his best friend has a crush on me.

And that I just moved in with them.

Oh, did I not mention we’re roommates?

I suppose it doesn’t matter. Fitzy has made it clear he’s not interested in me, even though the sparks between us are liable to burn our house down. I’m not the kind of girl who chases after a man, though, and I’m not about to start. I’ve got my hands full dealing with a new school, a sleazy professor, and an uncertain future. So if my sexy brooding roomie wises up and realizes what he’s missing?  He knows where to find me.