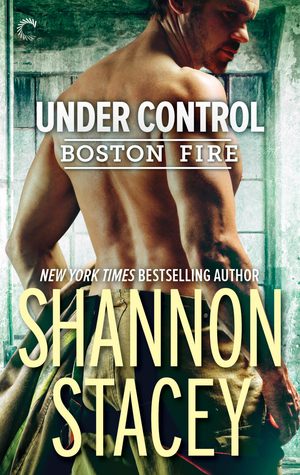 In a total meet-cute moment, Olivia and Derek are introduced to one another while stuck in an elevator. Although it’s not for a long time, it’s long enough to feel the pull of sexual attraction. On paper, these two are complete opposites, but you know what they say about opposites… Olivia is driven: an only child and product of a nasty divorce, she lives a well-structured life according to her own plan. She’s started her own highly successful business and lives in the nicer end of town. She isn’t rigid, and doesn’t freeze up if there are changes, but instead she deals with changes by planning more. On the other hand, Derek, firefighter and divorced father of two young kids, knows life is messy and plans are fluid. He is working class, and lives near his kids and the firehouse. He’s convinced that Olivia is “out of his league.”

I really like how Under Control plays out. It’s an HEA-romance that feels gritty and real without being overly dramatic. There is attraction followed by action between the pair, and then once they realize how good they are together, they individually consider how their lives will change if things keep moving forward.

Derek spends a lot of time contemplating what a future together would look like and what it means to his world. Normally I don’t care for the “what ifs,” as the characters play out scenarios in their heads rather than being decisive and taking action. But the fears and concerns that play out in Derek’s mind are genuine, and they add value to the story. Derek doesn’t know what will happen so he questions the paths his future may take.

Spending time together, the pair fall in love, and they truly want to make things work. The problem is each has only considered their own perspective on a future together. So when Derek and Olivia finally talk about their future – it’s painful because they both go into thinking it has to be a certain way. The conflict is emotional and genuine, leaving everyone involved, including myself, heartbroken. But this is a romance… so don’t worry too much!

Under Control is a sweet romance, filled with sexy times and authentic emotions. Falling for one another after an immediate attraction, Olivia and Derek go the distance to make it work, and I enjoyed following them on their journey.

When faced with the opportunity to change shifts while staying in the same house, veteran firefighter Derek Gilman jumps at the chance. His new schedule means not working Saturdays, which means more time to spend with his two kids. His divorce may have been amicable, but being a firefighter and a single dad is a lot to juggle. And when fate brings a gorgeous, wealthy woman into his life, he’s pretty sure he can’t handle more than he already is.

Olivia McGovern loves plans. She planned to start her own business and planned its growth. It’s earning her seven figures now, but her personal life simply doesn’t exist. Getting trapped in a broken elevator figures in exactly nowhere, and freaking out in front of a sexy firefighter definitely isn’t on the agenda. Especially not one with two kids and an ex.

What would have been a random incident with an attractive stranger becomes something more when a charity event brings them back together. They’re from different sides of the tracks, literally—with friends, family and careers to consider. But as Derek and Olivia are discovering, chemistry doesn’t allow for plans, and love doesn’t bother with logistics.