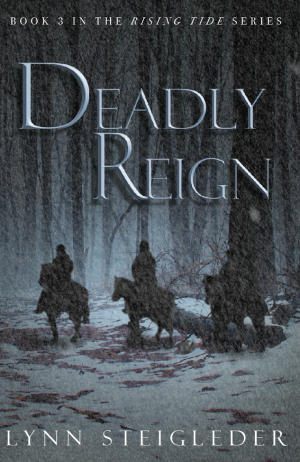 “I believe my purpose is known to all present,” Cahotic replied.

“Mount up,” Caleb said, “and do not remove your eyes from them.”

Pete complied and climbed onto his horse.

“I need no other than these,” Orac stated, holding up his fists.

“Now, Caleb,” Cahotic chastised, “is that a proper welcome for old friends?”

Orac backed up to meet Caleb. “Yes?” he said.

Caleb leaned over and whispered into Orac’s ear.

Orac smiled and then nodded, returning to his previous spot.

“Make ready,” Cahotic said, “and separate the necessary parts. We must renew our supply of gel.”

The riders pulled their swords and moved forward. The line was staggered in a stepped orientation, allowing each rider to shield the one behind. As the first aberration moved onto the snow-covered ice, an inaudible cracking ensued. Caleb sensed the ice give under the great weight, as the second rider followed his predecessor.

Orac bent over, slamming his mammoth fists into the ice. Cracks developed in the crust, spreading from the epicenter in spider-like fashion. Orac continued his barrage, crawling further onto the ice as he decimated the concrete water. He felt two points of pressure along his back. A small figure wrapped in fur vaulted from his flank and onto the rear of the first rider’s beast. He wielded a spear with a fine bronze tip attached to a smooth brown shaft. The newcomer plunged the spear with no ill effects, hitting pieces of armor and plated green scales. The first rider and his steed dipped to the left and then to the right. An ear-splitting crack echoed through the forest, and the rider sank. As the creatures continued their descent, the small figure jumped from the rider. With uncanny agility, the strange fur-covered form bounced along small chunks of ice, floating in the stream until he reached the bank. Astonishment enveloped The Three, uttering not a sound as they watched this acrobat.

The second rider attempted to turn and make it back to solid ground, reaching the bank as the ice collapsed beneath him. The animal sank to its midsection before it could gain a hold with its forelimbs, the aberration it bore slid off its back. Steam drifted upward from the pair as the water permeated their bodies.

Orac ceased his assault and circled around to return to his comrades.

Caleb turned to Ben. “Gather wood for a fire,” he said.

Ben, Pete and Eve dropped from their horses as the ice gave way, plunging Orac into the frozen slush.

The first rider was now chest deep in the center of the stream. Huge bubbles from underneath exploded as the beast that bore him disintegrated. The rider himself silently melted into the stream, his head exploding in small puffs as if boiling in a cauldron.

The second rider’s mount, using its front claws, inched itself onto the bank. Its rider plunged his sword deep into the beast, allowing it to pull him along. The pair breached the water’s surface, both formless from the midsection down, their remaining torsos dissolving in a mass of tiny gurgling eruptions.

“Give ground,” Cahotic commanded. The four remaining riders turned. “We will meet again, Caleb,” Cahotic’s voice trailed as they thundered into the perpetual darkness.

Caleb had the fire tendered. Ben and Pete helped the frozen giant out of the stream. They sat him in front of the meager source of heat. He was shivering violently and unable to speak. Caleb and Eve fueled the flames, bringing it to a roaring blaze.

“Two down and four to go,” Ben said, “not counting our new friend over there.” He threw a thumb in the boy’s direction.

“Five,” Caleb corrected, “and that is depending on where his alliance rests.” Caleb thought a moment, “Although I do not believe it to be with our enemies.”

The small one stood several yards away, bent in a defensive posture, pointing his spear at Caleb and The Three.

“Could he be the one that relieved us of the missing supplies?” Pete asked.

“Much better now, thank you,” Orac said, a lingering shiver causing his teeth to chatter.

“We will stay here for a short time,” Caleb said. “The water will offer protection while Orac recovers.”

“What about short stuff over there?” Ben asked.

“Time will also allow us to decide concerning the small one,” Caleb said.

“Maybe not as little as you would suppose,” Ben said, remembering the boy’s abilities. Having seen these for a few seconds, he wondered what else this young one was capable of.

“If you wouldn’t mind, dear Eve,” Caleb said, “see if you can influence the yearling.”

Eve stood, and extending a hand, moved slowly toward the boy.

In this, the third book in the Eden’s Wake Series, Ben, Eve and Pete continue to push through this new Earth as the world sinks deeper into corruption. They gain new allies, including an intellectual animal equipped with the gift of speech. They are forced to battle six aberrations (beasts and riders) deemed nearly indestructible. The environment has manifested into a frigid terrain with the sun lost in the ice filled cloud cover. Swords forged specially for the riders by the riders offer another layer of defense to an already superior force. The humans have deduced that water may possibly be a weapon, but a weapon that even now is freezing at an accelerated rate.