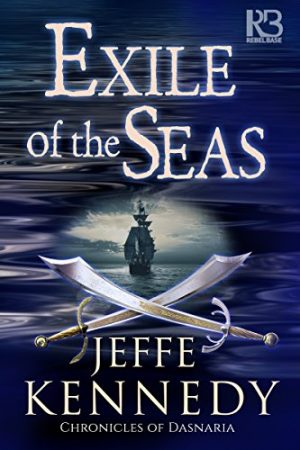 “It never hurts to honor all of the Three,” Kaja had said, when I asked her why I should bother with Glorianna and Moranu, if I was going to swear myself to Danu. “They are sisters, yes, so They love each other, but sisters are also jealous, yes?” I’d thought of my own sisters, Inga and Helva, who I’d left behind, how we’d fought over the most petty of things, like klúts and hair ornaments, all of which I’d pay in a heartbeat to simply see them again. “Never make a goddess jealous,” Kaja continued, seeing my rueful agreement. “Not when you can have Her love as Her sister’s daughter. See? They can be as generous aunts.”

“What is this good idea?” I prodded. Kaja liked to make me push her for answers, saying I had to learn to ask the right questions.

“Tomorrow we dock at the Port of Ehas. No!” She barked, startling me, then more so when she thumped my wrist, sending the dagger flying again. “Don’t loosen your grip. A knife is not for dangling like some dainty posy.”

“We were talking,” I grumbled, crawling under the bunk yet again to find the thing. A warrior always retrieves her own blade. “And I don’t even know what a dainty posy is.”

“It doesn’t matter what you might be doing. A blade is in your hand; a blade stays in your hand. You have the grip of a girl.”

“I am a girl.” I stood to face her, clenching the hilt in my hand in case she tried to knock it away again.

“No,” she corrected, shaking her head. “You are a warrior of Danu.” She waited, brows raised, and I had to retrace the conversation. Kaja liked to do this, shaking my concentration, startling me out of complacency. I tended to daydream—or fall into those odd trances. She was forever saying that was fine for luxurious seraglios where I’d been no more than a pampered pet, but in the world I needed to be alert and ready.

“What is significant about the Port of Ehas?” I asked.

“Oh, it’s a grand port. Capital city of Elcinea and also a lovely place.” She stopped there. Waited for me to ask a better question.

“What is your idea and what does it have to do with us docking at the Port of Ehas?” I asked with elaborate patience.

She grunted, though I couldn’t tell if it was in approval or disapproval. “It’s the end of my journey, and I think you should disembark with me.”

“What? No, I—Danu take it!” I exclaimed as she knocked the blade out of my hand, sending it under the bunk again. At least crawling under there gave me a moment to master my sudden grief and fear. I hadn’t thought about Kaja leaving theValeria. Of course, I’d known we all would. But I’d liked pretending this time would last forever.

“When surprised by something, tighten your grip if you must, to learn this habit. Someone jumps you from behind, you don’t curl up and whimper. You draw your blade. You use it. Which means you must hold on to it.” She glared at me, her dark eyes glittering, mouth pressed into firm lines. “How many times must I tell you this?”

I stood again, holding the blade tight. “I understand, but hearing isn’t learning.”

Unexpectedly, she smiled. “This is one of the smartest things you’ve said. Now, my plan is this. You will tell the captain you will go ashore in Elcinea. You will take all your things. And the frightened girl masquerading as a boy who paid him with a very obvious pearl will disembark in the large and busy Port of Ehas, never to be seen again. I have a bit of time before I must report to my next assignment. I can introduce a new acolyte to the Temple of Danu.” Her grin broadened. “You.”

“Me? But—ha!” I kept my grip on the dagger, anticipating her move, then cursed when she easily made me lose the practice dagger in my left hand. “Danu’s tits!” At least this one went under the table.

“Good with the cursing, but still too much Dasnarian,” she coached. “As an acolyte, you can take a vow of silence. This is in keeping with a vow of chastity, too. I will speak for you, and your accent and poor words won’t give you away.”

“Your words in Dasnarian aren’t exactly perfect,” I informed her.

“And no more imperial princess!” She snapped her fingers in front of my face. “You are not royalty. You come from Isles of Remus, where you were a goat girl.”

“You like goats. Is natural connection. We stick with who you are as much as we can. You had many brothers and sisters, but you grew up on a tiny island, ignorant. No teachers. You learn some from traveling priestess of Danu, then travel to Ehas as acolyte. You wish to take vows of silence and chastity, then we put you on another ship, this time as someone else.”

“I don’t see how—” This time I evaded her strike, using a dance step to duck out of her reach. I couldn’t imagine being without Kaja, even after such a short span of knowing her. I was like a child who couldn’t swim, latching on to first one edge, then another.

“Better, though a trick that won’t always work,” she allowed. She took one stride and had me backed into a corner. “Now what, little mouse?”

I did my best to fight my way out. Not that I quite succeeded, but every day I came a little closer to it.

Around the shifting borders of the Twelve Kingdoms, trade and conflict, danger and adventure put every traveler on guard . . . but some have everything to lose.

ESCAPED
Once she was known as Jenna, Imperial Princess of Dasnaria, schooled in graceful dance and comely submission. Until the man her parents married her off to almost killed her with his brutality.

Now, all she knows is that the ship she’s boarded is bound away from her vicious homeland. The warrior woman aboard says Jenna’s skill in dancing might translate into a more lethal ability. Danu’s fighter priestesses will take her in, disguise her as one of their own—and allow her to keep her silence.

But it’s only a matter of time until Jenna’s monster of a husband hunts her down. Her best chance to stay hidden is to hire out as bodyguard to a caravan traveling to a far-off land, home to beasts and people so unfamiliar they seem like part of a fairy tale. But her supposed prowess in combat is a fraud. And sooner or later, Jenna’s flight will end in battle—or betrayal . . .