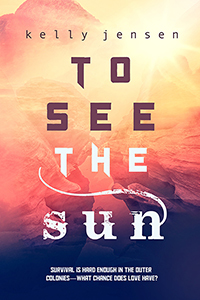 Gael tried to pull his hand away from the rifle stock, but the metal seemed to cling to his palm, warm and buzzing. A whimper rose in his throat as his finger tangled with the trigger guard. The window across the alleyway blurred and shifted to reveal his brother, and Loic was staring at him with an apologetic expression. “Hurts, Gael. Hurts,” he said, over and over.

Dark curls clung to one side of Loic’s face and his head was shaped oddly. Dented, sort of flat. Blood seeped across his forehead, mingling with sweat and grime.

The targeting buzz tickled Gael’s palm again. A high, tight whine edged past his lips. His finger was stuck. The gun hitched back in his hand, firing. Inside his head, a wail rose as he tried and failed to pull his finger out. The rifle continued to shudder, shot after shot echoing in the place where his yells should be. Across the alley, Loic’s head came apart in green-tinged horror.

Screaming, Gael jerked forward and fell. Pain exploded across his forehead and a flare of white light obscured images of blood and brain. He reached for his head, fingers groping madly along his hairline, tangling in curls instead of trigger guards. A vision of brain matter flickered across the white space behind his closed lids as he continued probing. He found no broken pieces, no squishy pieces, no holes, no blood. Just sweat and an egg-shaped lump in the center of his forehead.

Reality slowly replaced the nightmare. He was in the observation lounge aboard the freightliner Lennox with a shiny new ID chip and a completely legitimate travel voucher. He must have rolled off a bench and hit his head on one of the restraint hooks.

Gael crawled over to the holo viewer controls and keyed them on. His request was met with a quiet tone and the message: “The Lennox is currently in transition. What would you like to view?”

He already knew not to ask for Alkirak. The Lennox database had no visual data on the remote planet, only a sparse Galactipedia entry. His thoughts were too scattered to fiddle with any number of words. He wanted something to look at.

“Show me the Bhotan system.”

The ceiling and walls flickered once before fading behind an outside view of his home system. Zhemosen was the third of five planets. He’d learned that here, in this lounge, and he’d seen his first glimpse of it from space—the impossibly blue marble dotted with strings of clouds and islands, replicated now in holo form.

Four weeks into his journey across the stars, he still had a hard time marrying his view of the City Without End with the pretty planet spinning over his head. He’d seen holos and pictures of the beaches, the oceans and the islands, but all he’d ever known was the undercity. Dark streets, bitter air, and water that tasted like sweat. Sometimes it seemed impossible that they were all on the same planet.

Gael sat on the bench and leaned back against the wall. His heart rate had calmed, but his hands still tingled and his head hurt. He didn’t dream every time he slept, but often enough that he’d developed a schedule whereby he stayed awake for as long as he could before passing out in a convenient corner, hopefully exhausted enough to sleep.

Survival is hard enough in the outer colonies—what chance does love have?

Life can be harsh and lonely in the outer colonies, but miner-turned-farmer Abraham Bauer is living his dream, cultivating crops that will one day turn the unforgiving world of Alkirak into paradise. He wants more, though. A companion—someone quiet like him. Someone to share his days, his bed, and his heart.

Gael Sonnen has never seen the sky, let alone the sun. He’s spent his whole life locked in the undercity beneath Zhemosen, running from one desperate situation to another. For a chance to get out, he’ll do just about anything—even travel to the far end of the galaxy as a mail-order husband. But no plan of Gael’s has ever gone smoothly, and his new start on Alkirak is no exception. Things go wrong from the moment he steps off the shuttle.

Although Gael arrives with unexpected complications, Abraham is prepared to make their relationship work—until Gael’s past catches up with them, threatening Abraham’s livelihood, the freedom Gael gave everything for, and the love neither man ever hoped to find.

If aliens ever do land on Earth, Kelly will not be prepared, despite having read over a hundred stories of the apocalypse. Still, she will pack her precious books into a box and carry them with her as she strives to survive. It’s what bibliophiles do.

Kelly is the author of a number of novels, novellas and short stories, including the Chaos Station series, co-written with Jenn Burke. Some of what she writes is speculative in nature, but mostly it’s just about a guy losing his socks and/or burning dinner. Because life isn’t all conquering aliens and mountain peaks. Sometimes finding a happy ever after is all the adventure we need.