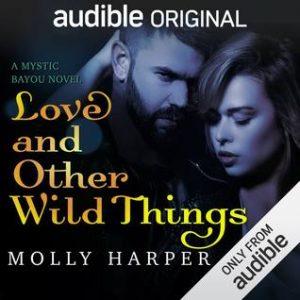 Love and Other Wild Things is the sophomore title in Ms. Harper’s Mystic Bayou series. As a standalone romance, it can be enjoyed without having read the first book; however, the world building and overall series arc are established in that first book, How to Date Your Dragon. The tale centers around bear-shifter, Mayor Zed and newcomer energy witch Danica (Dani). The League has hired Dani to help study and repair the mystical rift out in the bayou – hoping to slow down any changes its energy is doing to both the magick and humans.

Dani and Zed experience a mutual attraction from their first meeting. However, as a bear-shifter, Zed recognizes Dani as his mate and wants to pursue a relationship. I like the balance between his desire to just be around Dani and the need to mate with her that Zed must achieve in order to not scare away Dani, who has trust and relationship issues. Dani is also dealing with a financial crisis at home, strengthening her resolve to keep the mayor at a distance as to not mess up her job. The pair gives into the attraction sooner rather than later, but they remain emotionally separated until they slowly come to know one another.

I enjoyed the mystery revolving around the rift, including who and why someone wants to sabotage the work Dani does. While there are a few starts and stops, the entire situation lends to something bigger going on, which excites me. I was a bit disappointed with Dani a couple times when she wasn’t very smart in her actions (or non-actions), but it didn’t impact the overall enjoyment of the book.

The story is shared in a dual narrative, with Amanda Ronconi (AR) reading the parts told from Dani’s POV and Jonathan Davis (JD) the parts shared from Zed’s POV. Overall, both did a good job, with AR’s performance slightly better than JD’s. My biggest issue was that I had to switch between speeds based on narrator; JD has such a slow, relaxed pace, I couldn’t listen to it at the 1.25x I enjoyed for AR’s performance. Their styles and sounds are different, so it took time to readjust to the narrators when they switched POVs. AR is more perky and lively. She nails the females, although Jillian and Dani sounded similar, and same with Bael and Zed, which caused for some confusion when there was a lot of dialogue. JD was good, but slow. And the opposite of AR… relaxing rather than energizing. He fit the deep bravado needed for Zed, and I think had the entire book been read by JD, his performance would have worked better for me. It just didn’t seem to mesh with AR as much as I would have liked.

In the end, Love and Other Wild Things is an enjoyable romance with a paranormal twist. I like the building mystery surrounding the rift and Mystic Bayou. That aspect is equally as engaging as the romance. Dani and Zeb are sweet together. They get to know one another, open up and learn to trust. I like that her issues didn’t keep them apart, and they talked through things.

Welcome to Mystic Bayou, a tiny town hidden in the swamp where shape-shifters, vampires, witches, and dragons live alongside humans. The town formed around the mysterious energy rift in the bayou, which helps keep the town’s magic in balance. But lately the rift has been widening and destabilizing – threatening to send the town’s magical population into chaos.

Energy witch Danica Teel has been sent by the League to figure out what’s going on, with the help of bear-shifter Mayor Zed. While working on the case, Zed falls head over paws for Dani, but she’s reluctant to engage in anything beyond a roll in his cave. Dani’s family is counting on her to get the job done, and she has no time for distractions. But when an ominous presence begins stalking Dani through the bayou, they’ll need to band together to make it out alive.