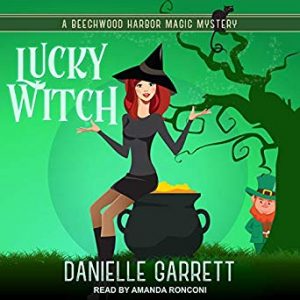 Lucky Witch opens only a few short weeks after the dramatic events that unfolded near the conclusion of the previous book, Witch Way Home, when human friend Nick was abruptly introduced to the supernatural world following a werewolf attack. With Holly feeling responsible and Adam willing to help the transition, the friends are shocked when the full moon hits and Nick’s transformation doesn’t go as planned. Couple that with a dead werewolf in the woods and a mysterious leprechaun, Beechwood Harbor Manor is once again the center of all things problematic.

I genuinely adore the Beechwood Harbor Magic Mysteries and main character Holly Boldt’s crazy, flustered life. The cozy mysteries are usually well-thought out and keep me on the edge of my seat trying to figure out what is going on. I also love the friendships Holly has made and the hint of romance with shifter Adam. With that said, Lucky Witch seems to fall short on both the mystery and romance fronts.

First, the mystery of who killed a werewolf in the Manor’s woods, and the reasons behind the murder, begins in a promising way. Everything seems to point to Nick’s odd transformation and the story that began in the previous book. However, as the mystery unfolds, the strength of the story diminishes, and I felt like some of the parts were not supported by the clues. Overall, the end result felt weak and a bit disappointing. Additionally, the side story with the leprechaun goes no where, and I was left wondering why it was even part of the book in the first place.

Second, and the really frustrating thing for me, is that issues pop up AGAIN between Adam and Holly. This has been a long-standing problem for me throughout this series. The pair seems to get settled in one book, only to have things come between them in the next book. I have said this before, but it’s worth repeating – either get them together or break them up, end of romance. I will admit, things felt good between the pair at the close of the book, but I’ve felt that way before only to be disappointed. With only one book left in this enjoyable series, I truly hope things are settled for good this time!

As always, Holly and her friends are brought to life through the performance of Amanda Ronconi, who has consistently done a wonderful job. Her interpretation of Holly is always spot on – flustered and frazzled – just like Holly. Ms. Ronconi convincingly portrays Holly’s thoughts, concerns, and expressions. She helps solidify Holly as a favorite character of mine. Her female voices are each a bit different and well-suited. And unlike in previous books, I didn’t notice confusion between her male characters. Whether it is because of the narrator, writing, or both, I’m not certain, but overall, Ms. Ronconi does a wonderful job.

In the end, Beechwood Harbor Magic Mysteries remains one of the more enjoyable series I’ve listened to, and despite my frustrations with Lucky Witch, I still look forward to listening to more in the series.

My Ratings
Story: B-
Narration: B+

At least, right up until a dead body shows up in the woods behind the esteemed Beechwood Manor.

With the townspeople distracted by a mysterious shamrock-themed scavenger hunt, everyone seems content to chalk up the death as a tragic hunting accident. But when the clover-shaped clues lead back to the crime scene, things take a deadly turn.

With a rogue leprechaun on the loose and something sinister lurking on the edges of town, it’s up to Holly to stop the murderer and keep secret paranormal powers from swallowing up the sleepy town she’s grown to love.