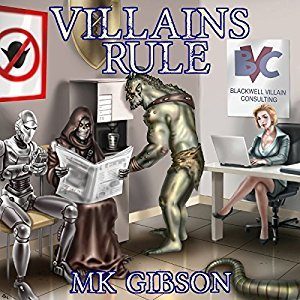 Villains Rule is an entertaining story which shares the antics of Jackson Blackwell, aka the Shadow Master. An enterprising human, Jackson somehow created his own pocket dimension and makes a lot of money advising villains across the realms. Each realm appears to be literary world and/or genre. In this tale, Jackson finds himself back in the field rather than behind a desk, trying to assist a fantasy-realm bad guy, who ends up double-crossing him and leaving Jackson on his own in a strange land. However, Jackson understands the rules of this fantasy realm and bends them to suit his needs, proving that a true villain will do whatever it takes to win.

Trying to define Villains Rule or fit it neatly into any genre is impossible. The story bends and breaks established rules, with the protagonist often sharing his wisdom and knowledge directly with the listener (reader). The story mocks traditional fantasy tropes, with Jackson twisting the rules of the realm to suit his wicked plans. As a reader of fantasy books (and having seen several movies), I enjoy the ridicule of the norm and watching how Jackson works his way out of any dire situation. While he comes awful close to becoming the anti-hero, his actions always prove he truly is the bad guy.

Even a villain can use some help, and the supporting cast of characters is fabulous. I love his assistant Sophia, who always puts Jackson in his place and keeps him on the path to victory. Additionally, Jackson brings together a band of heroes, as the trope requires, so that he can defeat those who betrayed him. This group of would-be-saviors, with Jackson’s help, straddles the line between light and dark, but always bending to Jackson’s needs.

The story’s humor is amplified by the marvelous performance of Jeffrey Kafer. He’s got a voice made for television – one that seems so familiar, you’ll spend time trying to place where you may have heard it. Mr. Kafer displays a wide range of voices from Jackson’s smooth villain to his nephew’s lackadaisical drawl. He masters both male and female voices with distinction.

In the end, I throughly enjoyed the entertaining Villains Rule. The narration is absolutely fabulous; humor amazing. I love the sarcastic storyline and the fun had at the expense of fantasy tropes. Villains Rule is both original and fun.

Yes, I am talking to you, the reader of the this book’s description. It’s rude not to answer a person when they ask you a question. OK, I get it, 4th wall breaking is overdone. Get over it. This book, Villains Rule, is a fantasy action-comedy which you have to read. Not because it redefines the genre, far from it. But rather for what it contains. A villain’s tale.

How often do you get to read a story where the villain is the protagonist? No, not an anti-hero, or a brooding monster, nor a hero thinly disguised as a villain. And not evil. If you want evil, take that nonsense to therapy. No, I mean a villain’s villain. The ones who use their power because they can, while morality is only a philosopher’s complex.

This is the story of Jackson Blackwell, the Shadow Master and the top villain adviser. Sadly, even the top villain occasionally gets double-crossed. Trapped in one of the fantasy realms, Jackson has to use his skill and wits to exploit the rules, points out the genre flaws, undermine godly authority, and win the day.

Because, that is what villains should do, shouldn’t they? Read this book, have a few laughs, and find out.