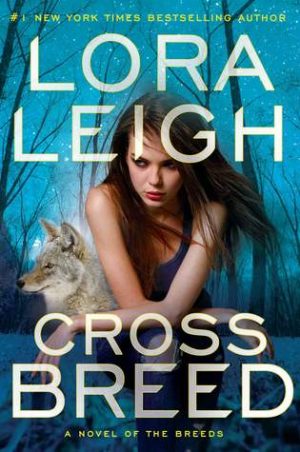 If you don’t want to know who Cassie’s mate is then do NOT read my review!

As a long-time fan of the Breed series, I’ve been waiting for Cassie’s book since the first whisper of her mate in Dawn’s Awakening. It’s been hinted at throughout subsequent books, and I’m happy to report Ms. Leigh does not disappoint. If you haven’t figured it out by now, YES, Dog is her mate, and he’s waited six years to claim what is his.

Overall, I enjoyed Cassie and Dog’s story. Their romance was filled with the usual need for male sexual dominance, but Dog recognizes that Cassie is a true alpha and respects her intelligence and intuition. While Dog did mislead her about being mates, I like that they both embrace the mating and fight outside forces together. And there are problems for the pair right from the start. First, there is another Breed challenging the couple, and second, the fact that Dog is a known Council associate causes Cassie to be locked out of her world and shunned by those she considered her friends. This allows the pair the opportunity to confide in and trust one another. I really enjoyed their unity.

I also enjoyed the Breed politics. I found the storyline revolving around the challenge to Cassie and Dog’s mating status interesting, adding some entertaining drama. Additionally, I found that the politics behind Dog’s secret life and motives gives the story added excitement and suspense. Because Dog is not an alpha or affiliated with an alpha, he’s rogue and Breed law doesn’t apply.

With that, I did have a few issues, which is par for the course with Ms. Leigh’s writing. While overall the story flowed smoothly, I felt there were a few hiccups. For example, right in the beginning, Cassie claims not to know the name of the Breed who has been helping her for the past six years – the one she has sex and mates with in the opening chapters. But then, once she returns  home, she knows exactly who he is. It just doesn’t flow well. Additionally, I have always been confused on who knows what about Dog – I thought many knew he was really a good guy, but apparently it was always just Jonas.

I also had a pretty significant issue with the storyline involving Jonas’s second in command, Rhyzan. What started out a bit confusing, gained focus and looked to be exciting. But then his character just disappears from the book altogether. There is no mention of why his character isn’t involved in the climatic scenes of the story.

And then… there was the “sacrifices” Dog makes to “protect” Cassie. I did some serious eye-rolling when this part took place near the end. But honestly, I don’t expect much from these books any longer.

In the end, I’m glad I stuck around the series long enough to get Cassie’s book. It was worthy of her. She’s been a bit wilted and faded in recent books, and I’m glad to see her strong and powerful. Cross Breed is straight-forward, and I liked that the pair accepted the mating early on. But as always, I seem to find issues with the writing and I’m not sure if I’ll continue with the Breeds series.

It’s been over a decade since she was introduced as an unforgettable eight-year-old in Elizabeth’s Wolf. Now all grown up, Cassie is unique among the Breeds as a Coyote/Wolf mix. She has long known that her mate was somewhere out there, but he’s stayed frustratingly out of sight and beyond her senses. Cassie has decided to make her move and her mate is ready to make his. The Breed world will be rocked to its foundation as dangerous secrets are revealed.