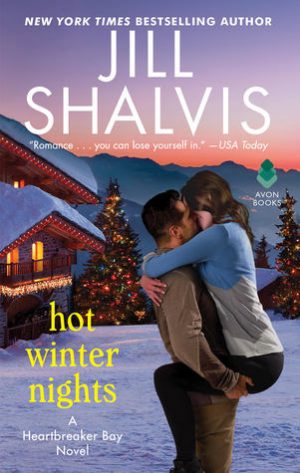 Hot Winter Nights is the next installment of Ms. Shalvis’s Heartbreaker Bay series which revolves around a group of friends who live and work in the San Fransisco area. This romance features two familiar characters – Molly, the office manager of Hunt Investigations, and Lucas, one of the investigators. With Molly being the little sister of his best friend, Joe (hero of the previous book), Lucas has always kept his distance. He may find Molly attractive, but he wouldn’t cross that line… until he wakes one morning to find Molly in his bed. Due to the combination of alcohol and pain killers, Lucas doesn’t remember Molly coming back to his place. Although nothing happened between the pair (she was looking out for him), he doesn’t know for certain, and Molly teases him about his “lack of performance.” This light-heartedness and banter allows for the pair to actually let their guards down and begin to explore their mutual attraction.

I like Molly and Lucas together. Both have histories that cause them to be a bit closed off, so the fact that they are friends first helps each overcome some of their fears of getting involved. Simultaneously, the pair is working on an off-the-books case for Molly’s neighbors, which adds an element of danger and suspense – bringing them together outside the office. Danger always creates a quick-to-feelings situation for romantic couples and is a familiar tool used by the author in this series.

While the opening quarter of the book relies on humor to keep the couple moving forward, the shift towards the investigation brings about a more serious tone. I missed some of that light-hearted humor as the book progressed. I also missed the interactions between the gang of friends, which wasn’t as predominate in Hot Winter Nights as it has been in previous titles. Archer and Molly don’t confide in their friends for some obvious reasons, but it leaves the book missing that element of camaraderie.

Overall, I really enjoy the Heartbreaker Bay series. Each book has some common themes and structure making it familiar and comfortable, yet each story is unique and standalone. Molly and Lucas are the latest sweet/sexy couple to benefit from magic of the courtyard fountain and finding true love.

Most people wouldn’t think of a bad Santa case as the perfect Christmas gift. Then again, Molly Malone, office manager at Hunt Investigations, isn’t most people, and she could really use a distraction from the fantasies she’s been having since spending the night with her very secret crush, Lucas Knight. Nothing happened, not that Lucas knows that — but Molly just wants to enjoy being a little naughty for once…

Whiskey and pain meds for almost-healed bullet wounds don’t mix. Lucas needs to remember that next time he’s shot on the job, which may be sooner rather than later if Molly’s brother, Joe, finds out about them. Lucas can’t believe he’s drawing a blank on his (supposedly) passionate tryst with Molly, who’s the hottest, smartest, strongest woman he’s ever known. Strong enough to kick his butt if she discovers he’s been assigned to babysit her on her first case. And hot enough to melt his cold heart this Christmas.