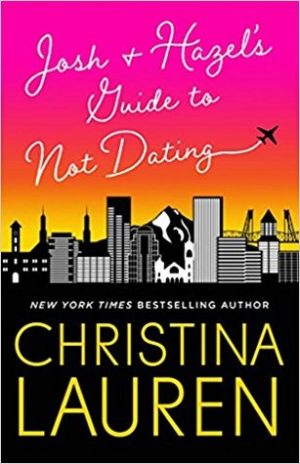 Josh and Hazel’s Guide to Not Dating is one of the most touching friends-to-lovers stories I’ve enjoyed over the years. Reminiscent of When Harry Met Sally, the story follows Josh and Hazel from the first few times they met in college, to when they become best friends about seven years later. Hazel knew from the moment she met Josh that he was her idea of Mr. Perfect, but she understands they are completely incompatible. So when they meet up at his sister’s / her best friend’s barbecue, Hazel determines they will be best friends. And as best friends do, they set up one another on dates. And more dates. And even more dates.

Hazel is a bit eccentric, and she embraces it. She knows she’s zany, loud, and a bit manic, but she’s not going to change for anyone. And I love this about Hazel. Too often we have heroines who want to change to please others. But not Hazel; she’s all “f-them” if they don’t want to be around her. She’s strong, with a great outlook, but even then, she can be a bit hard on herself, disbelieving that someone like Josh accepts and enjoys her idiosyncrasies.

Josh is mellow and kind, and he is surprised by how much he likes hanging out with Hazel. Yes, he’s attracted to her, but he doesn’t want to pursue things. However as the pair grows closer, going on set-up after failing set-up, he realizes it’s Hazel that he enjoys most about their crazy dates. What makes their story extra-special, is that Josh is willing to acknowledge and pursue his feelings rather than dismiss them.

The fear of messing it up and losing Josh is so real for Hazel, that she refuses to accept any sort of relationship, even after the pair have sex. But they stick by their friendship, keeping things moving forward. Their dating exploits are funny, and serve to show them both how much they love being together. And they come to each realize that they are both at a place in their lives when they are ready for true love and family.

Josh and Hazel’s Guide to Not Dating is sweet, happy, and will tug at your heart. I highly recommend this wonderful romance.

Hazel Camille Bradford knows she’s a lot to take—and frankly, most men aren’t up to the challenge. If her army of pets and thrill for the absurd don’t send them running, her lack of filter means she’ll say exactly the wrong thing in a delicate moment. Their loss. She’s a good soul in search of honest fun.

Josh Im has known Hazel since college, where her zany playfulness proved completely incompatible with his mellow restraint. From the first night they met—when she gracelessly threw up on his shoes—to when she sent him an unintelligible email while in a post-surgical haze, Josh has always thought of Hazel more as a spectacle than a peer. But now, ten years later, after a cheating girlfriend has turned his life upside down, going out with Hazel is a breath of fresh air.

Not that Josh and Hazel date. At least, not each other. Because setting each other up on progressively terrible double blind dates means there’s nothing between them…right?