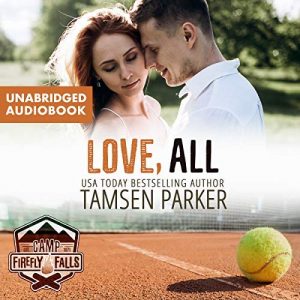 Ruby Hudson is a single mom who’ll do anything for her daughter, Chloe. Sure, there are plenty of things she’d have liked to do for herself over the years, but she and Chloe are an amazing team, and nothing will stop her from earning enough money to pay for the riding camp that Chloe has been begging to attend. As nice as it would be to have someone in her life who put her needs first every now and then, she has no regrets—and no room for a relationship that’s bound to cost her more than she has to give.

Despite his mother’s best matchmaking efforts at his sister’s wedding, Nate Carter isn’t going to settle down with someone he doesn’t feel a serious spark with. No matter how pretty and accomplished most of the women he’s met are, Nate is looking for a real connection—one that could last a lifetime. Much like the one he felt with the exhausted cater-waiter who spilled salad dressing all over his tuxedo pants, then invited him to have sex with her in the back of her ancient Subaru. But, if convincing Ruby to let him into her life, even temporarily, had been difficult, winning her heart just might be impossible.

Having recently read the ebook edition of this story, I was happy to find that my overall enjoyment of Love, All was reinforced by the audiobook. Ruby is still my favorite of the two, her fierce protectiveness combined with her belief in herself make her a character who is easy to pull for. Nate is also interesting, if a little less relatable, and I found myself hoping all over again that he’d be the man Ruby needs him to be very much.

As to the narration of Love, All, I actually enjoyed this performance more than I did the previous story, In Her Court. Ruby’s frustration, cynicism, and fatigue came through vividly, as does her acknowledgement of her own desires. I also felt that her love and protectiveness of Chloe are interpreted particularly well. I think the narrator’s depiction of Nate was nicely done, and I was especially fond of the way she indicated that his charm is primarily a byproduct of his natural goofiness. As Nate’s best friend, Van, is still a favorite of mine, I was happy for every scene she appeared in.

Whether in ebook or audio, Love, All offers a theoretical account of what the exploration of romance as a single mother could be like. Ruby is both resilient and passionate, while Nate is still as well-intentioned and funny (if infrequently, yet painfully presumptive) as I remembered. As is the case with its ebook counterpart, the audiobook version of Love, All successfully navigates the less facile aspects of such relationships which are neither tidy nor convenient. As Nate is rather harshly reminded later in the story, there isn’t a “good deeds layaway plan” when it comes to matters of the heart. Regardless, I think fans of both Ms. Parker and the series as a whole will enjoy this performance, and I’m going to keep my eyes open for either option from this author in the future.

Nate Carter is living the good life. Taking a break from his engineering day job to be Camp Firefly Falls’ resident tennis instructor, he’s got nothing on his plate besides acting as best man for his sister and his BFF’s wedding and avoiding a summer-ending injury like the one that sidelined him last year.

An unfortunate incident involving salad dressing and his tuxedo finds Nate face to face with struggling single mom Ruby Hudson, who’s moonlighting as a cater waiter. After their calamitous meeting, they have a far more satisfying end to their evening in the back of Ruby’s ancient station wagon.

Nate is keen for a repeat or even a relationship, but Ruby doesn’t have time for the handsome tennis player no matter how sexy his forearms are. But after convincing her to give him a shot, Nate thinks their relationship might be able to go the distance.

The end of the season is fast approaching, and Nate is ready to put his heart on the line, but his assurances and their chemistry may not be enough for Ruby to upend her life. After all, in tennis love means nothing.