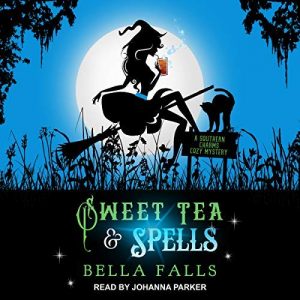 Picking up with the residents of Honeysuckle Hollow about two months after the conclusion of the previous book, Sweet Tea & Spells opens with Clementine’s bridal shower. Although protagonist Charli doesn’t see eye-to-eye with Clementine’s mother, Aunt Nora, and Clementine is marrying Charli’s ex, Tucker, Charli feels she should make an attempt to connect with her only family. Unfortunately, things go wrong with cake and Aunt Nora blames Charli. This is where we first meet bad guy Duke, a man who keeps secrets on all the powerful people in the wizarding world. So, when Duke turns up dead, there is no shortage of suspects, nor is there a shortage of reasons why he was killed.

The murder mystery aspect of Sweet Tea & Spells was very interesting. The storyline was the most complex to date in this paranormal cozy mystery series. With each suspect, there was a different motive for hating the dead man. He held secrets on many powerful people, as well as having a siren slave who was required to do his dirty work. It took a while for the pieces to fall into place, and I pretty much guessed what had happened, but I liked how this storyline moved and flowed through the book. My only issue was once the criminal was “unmasked,” his demeanor changed one-eighty from belligerent to cooperative. It felt sudden and out of character.

While the murder storyline was fairly involved, the entire book was filled with a number of side stories, some pertaining to the mystery, and others not at all. After a while, I felt that there were too many extraneous side stories, making it overwhelming and difficult to follow everything that was happening.

Another issue I had with the book was the portrayal of the sheriff and the “local police” as completely inept without Mason in town. I want to know when in the past year or so we’ve been visiting Honeysuckle, did Mason become the only detective that knows basic police procedures. The ordeal is used as a plot device to get Charli involved in the case, even after Mason returns. It was weak and disappointing.

I was also frustrated with the developing romantic storyline for this series. In the previous book, Charli grew close to Dash, and I felt like she’d made her choice. But the author kept him out of Sweet Tea & Spells completely, and in steps Mason. And Mason is a “new man,” having returned from a dangerous mission “up north.” He’s rough around the edges, but open and honest with Charli about his past – something Dash refused do previously. Overall, the romantic storyline was subpar, and I felt it brought down the quality of the tale.

Having listened to two previous books in this series, I have come to associate Ms. Parker’s voice with heroine Charli. Her easy-going southern drawl brings Charli, and all of her idiosyncrasies, to life. Additionally, she is able to add just enough emotion into Charli to help identify when she’s frustrated, joyful, sad, etc. Ms. Parker’s narrative style sets the tempo and mood, keeping the cozy mystery light and entertaining. Additionally, she successfully creates a number of unique voices for each of the supporting paranormal creatures.

In the end, I enjoyed listening to Sweet Tea & Spells, despite the few issues I had with the storylines. I definitely want to know what is in store for Charli down the road, I just hope that the romantic storyline is downplayed a bit more, while keeping up the calibre of the mysteries.

A prank war has erupted in Honeysuckle, and spells are flying everywhere. All’s fair in spells and sport, but when one goes terribly wrong and someone ends up dead, it’s up to Charli Goodwin to figure out who’s to blame.

At the same time, she’s also on a mission to learn more about her past and do her best to harness her growing magical powers. Will she be able to pull herself together in time to stop things before more lives are at stake in the magical small Southern town?