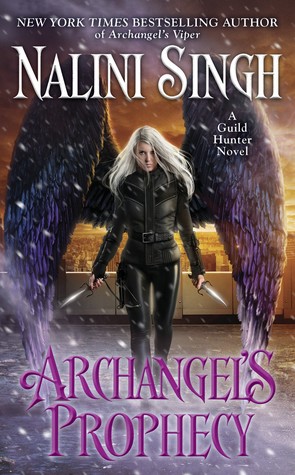 The Guild Hunter series is one of my favorites, especially when the storyline focuses on primary characters Elena and Raphael, and Archangel’s Prophecy places the angelic couple back on center stage. It’s been about two and a half years since the trip to Morocco and Elena’s discovery that her maternal grandparents are alive. She’s back in Manhattan and doing her job as a Hunter. While the Cascade has been fairly quiet for these couple of years, new events begin to unfold, and Elena herself appears to be a victim of the Cascade.

So… where do I begin with my review of this series-changing story? It’s hard to write a spoiler-free review because of how I felt about some of the events during the action-filled climatic fight scene and the last several chapters of the book. I will let you know up front that the ending of the book is sort of cliffhangery. There are some huge Cascade-driven events happening to the world which directly impact Raphael and Elena, and we don’t know the extent of these changes by the conclusion of Archangel’s Prophecy.

Overall, the story is masterfully crafted, both mentally and emotionally satisfying. Elena’s vampiric brother-in-law is brutally attacked and with the threat of danger to her sister and niece, Elena personally takes on the case. She works with her companions and the Guild to piece together a puzzle that no one even knew existed. Meanwhile, the Cascade has brought another ancient out of Sleep, haunting Elena, sharing a dooming prophecy. And if that isn’t enough, Elena’s wings begin to fail and it appears as if her transformation to immortality is regressing. As difficult as these changes are for Elena to adjust to, the end results have the potential to break her Archangel lover. The entire situation lends itself to powerfully emotional scenes – I’ll admit I shed some tears. More importantly, they give space for the author to continue to write one of the most powerful love stories ever. It’s hard to imagine, but Raphael and Elena grow even closer, cementing their already unbreakable union.

While I loved over 90% of the book, I did have a couple issues with the last bits. First, I was disappointed with the use of the Cascade in the climatic fight scene. No spoilers – but it felt too easy to blame certain aspects of the action on the Cascade. Second, the last several chapters felt out of place with the book. While they give readers a small amount of closure for the existing storylines, I felt they did more to set up the next book, which indicates to me maybe they shouldn’t have been included in Archangel’s Prophecy. They sort of prolonged the ending rather than give closure.

In the end, Archangel’s Prophecy is another wonderful chapter in Ms. Singh’s Guild Hunter series. The combination of amazing world-building, creative storylines, fulfilling character development, and sublime romance makes this book and series one of my all-time favorites. While I may be a bit afraid of what will happen next, I completely trust in Ms. Singh’s vision and storytelling.

Midnight and dawn, Elena’s wings are unique among angelkind…and now they’re failing. The first mortal to be turned into an immortal in angelic memory, she’s regressing. Becoming more and more human. Easier to hurt. Easier to kill.

Elena and Raphael must unearth the reason for the regression before it’s too late and Elena falls out of the sky. Yet even as they fight a furious battle for Elena’s very survival, violent forces are gathering in New York and across the world.

In China, the Archangel Favashi is showing the first signs of madness. In New York, a mysterious sinkhole filled with lava swallows a man whole. In Africa, torrential monsoon rains flood rolling deserts. And in Elena’s mind whispers a haunting voice that isn’t her own.

This time, survival may not be possible…not even for the consort of an archangel.