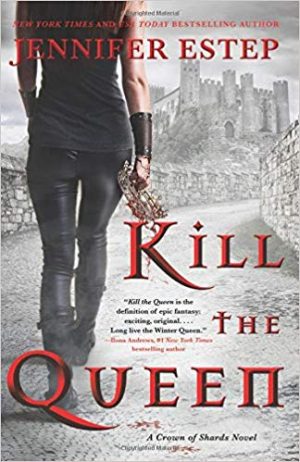 Kill the Queen is the first book in Ms. Estep’s new Crown of Shards fantasy series. Having read both Ms. Estep’s Elemental Assassin and Black Blade series, I noticed the writing style felt familiar and similar to both, giving this epic fantasy series more of an urban fantasy, or “fantasy-lite” feel. Those who aren’t familiar with the author’s other works may not feel the same. With that said, Evie’s story was engrossing and hard to put down, just like Ms. Estep’s other books.

Taking place in a land of kings and queens, the story follows Evie, an orphaned, distant relative of the current queen of Bellona. Evie tries to remain invisible at Seven Spire, and she is often the whipping girl or used to fulfill royal obligations the queen and crown princess would rather not be involved with. Evie isn’t naive, yet she comes across much younger than her 28 years. She hangs onto the pain of childhood scars, some of which, in light of the current atmosphere, seem childish; especially the betrayal by her cousin, Princess Vasilia. With that said, I didn’t mind the younger vibe Evie gives off, as she is a strong woman who grows both emotionally and physically over the course of the tale.

Ms. Estep brings Bellona and its surrounding kingdoms to life through vivid details and sweeping descriptions. Through Evie’s eye and memories, we learn some about Bellona’s past and the current royal line. We don’t learn much about the history of the different kingdoms or what shaped the current political climate; however, it is clear that Bellona is one of the more powerful players, and war may be inevitable, regardless of who sits on the throne. As the blurb details, Bellona was built on the back of the gladiator tradition, and fighting, even to the death, is widely accepted and enjoyed as a sport. And while the violence is brutal at times, the book itself isn’t gory or gruesome.

Overall, I enjoyed Kill the Queen and look forward to finding out what happens next for Evie. I found the world interesting and Evie’s quest exciting, drawing me in until the end. While the book is a complete story, it’s clear that Evie has much to overcome before she can realize her full destiny.