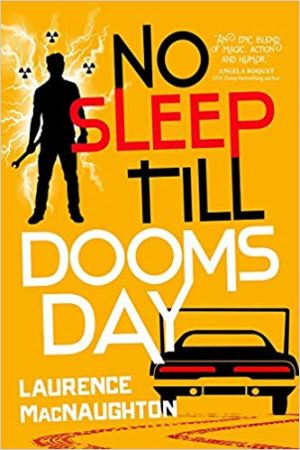 No Sleep Till Doomsday is supposedly the last* in the Dru Jasper trilogy.  The book begins with (finally) a real date between main characters Dru, crystal sorceress, and Greyson, super hot gearhead demonically connected to Hellbringer, one of the Four Horsemen of the Apocalypse in muscle car form.  Despite how great Greyson looks in a suit, the date, of course, doesn’t happen.  True to the first two books, the supernatural world literally comes crashing in the door of Dru’s store, The Crystal Connection, and doesn’t let up until the conclusion.  No one gets to sleep in this race to the end—or to thwart it if they can prevent Doomsday from happening when the Sixth Seal, specifically relating to earthquakes and other cataclysmic events, is broken.

This final* installment takes the apocalyptic romp that has been building as the characters get to know themselves through the first two books and brings it to an “earth shattering” conclusion.  (Sorry, not sorry, for the pun, but I couldn’t leave it alone) The book strives to keep up the same energy as the first two books, but as some of the gravity of what is happening sets in, it’s not quite as fun.  Also, as the ensemble of disparate characters continues to grudgingly work together, to need each other, it doesn’t feel like they get to know each other any better.  Dru even comments on how little she knows Greyson and begins to question their connection.  In the end, we get few answers about how this couple will go forward, something I consider to be a significant flaw if this is really the end of the series.

The story telling is more scattered than the first two books as it includes more perspectives, including Hellbringer.  I enjoyed the sarcastic dialog which continues to be a source of relief from the weight story.  My favorite line was, “I’ve got enough coffee in my system to make a frozen mastodon tap dance.”

I’m not going to spill on whether or not Dru and Greyson finally get that date, or if the world ends in catastrophe, but if there isn’t another book coming*, and I can’t believe I’m saying this, I would have really liked an epilogue.

*Edited to add: The publisher reached out to That’s What I’m Talking About to let us know that there will be a fourth book in the Dru Jasper series.

When a wicked enchantress steals a cursed doomsday amulet, crystal sorceress Dru Jasper has only twenty-four hours to get it back before the world will come to a fiery end. With this supernatural amulet in hand, the enchantress intends to break the sixth seal of the apocalypse scroll–making the seas boil, the stars fall from the sky, and the earth itself split apart. Overall, bad news.

Dru must hit the road to get the amulet back. But she suspects her half-demon boyfriend, Greyson, and his demon-possessed muscle car, Hellbringer, are hiding a dark secret. Can she trust them to help her stop doomsday? Worse, tracking down the enchantress runs Dru smack up against a pack of killer shape-shifters, the grim mystery of a radioactive ghost town, and a dangerous speed demon even more powerful than Hellbringer.

As the clock runs out, Dru is locked in a high-speed chase with the enchantress, fighting a fierce, magical duel she can never win alone. Can Dru and her sorcerer friends unravel Hellbringer’s secrets, outwit the shape-shifters, and retrieve the stolen amulet before the dawn of doomsday?