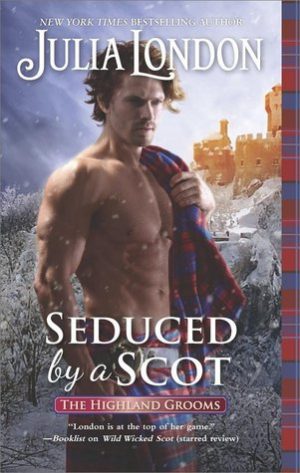 Seduced by a Scot is the sixth title in Ms. London’s entertaining Highland Grooms series. Although there is mention of previous characters and activities, the story is very much a standalone romance and enjoyable by its own rights. Readers briefly met Nichol, the man who fixes problems for others, in the previous book. He’s a bit of a vagabond, going from one job to the next and never settling down. Estranged from his family, he claims no name and no home. But he enjoys what he does and lives a contented life. That is until he meets Ms. Maura Darby.

Maura’s life has not been easy. After her parents died, a friend of her father took her in, but his wife and own daughter, Sorcha, never liked Maura. They are petty, jealous, and downright cruel, and although Maura does everything she can to stay out of the way, she finds herself the target of Sorcha’s fiance’s attentions. In steps Nichol to fix this problem by marrying off Maura to another man.

Nichol and Maura have a bumpy start. She does not trust him – and why should she? She’s been let down and hurt by everyone who was supposed to care for her. She was treated deplorably. Nichol is wonderful because he allows Maura to vent her long-held frustrations without chiding her. Unfortunately, he sees Maura has a problem to be dealt with rather than a person. But as the pair spend time together and learn more about one another, they grow incredibly close.

I enjoyed their journeys as each comes face-to-face with their past and learns to move forward. They have one another to lean on, and a kindred-spirit bond forms. It’s evident they are falling in love from their genuine compassion. Unfortunately, Nichol is determined to marry off Maura because he truly wants the best for her. His own doubts and history skews his perception of love, and his torment over the decision despite his feelings is heartfelt and genuine.

Overall, Seduced by a Scot is an enjoyable story filled with exciting adventures and a lovely romance. Maura and Nichol work because they are cut from the same cloth. They both know disappointment and hurt by those who were supposed to love them and care for them. But they both know how to take it in stride and move beyond, making their own way.

There’s no matchmaking an unruly heart

When a prominent Scottish family faces a major scandal weeks before their daughter’s wedding, they turn in desperation to the enigmatic fixer for the aristocracy, Nichol Bain. Remarkably skilled at making high-profile problems go away, Nichol understands the issue immediately. The family’s raven-haired ward, Maura Darby, has caught the wandering eye—and rather untoward advances—of the groom.

Nichol assuredly escorts Maura toward his proposed solution: an aging bachelor for her to marry. But rebellious Maura has no interest in marrying a stranger, especially when her handsome traveling companion has captivated her so completely. Thankfully, Nichol loves a challenge, but traveling with the bold and brash Maura has him viewing her as far more than somebody’s problem. Which raises a much bigger issue—how can he possibly elude disaster when the heart of the problem is his own?