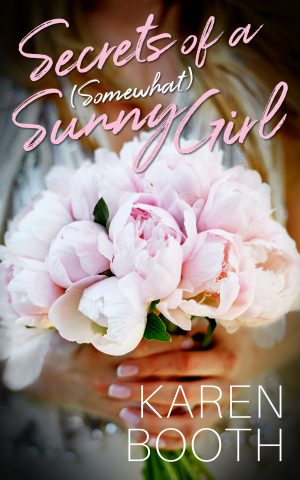 Katherine and Irish musician Eamon had a passionate relationship 11 years ago that ended abruptly when she returned to the U.S. to help with her alcoholic father. Katherine and her sister, Amy, who lost their mom when they were young, are walking home after seeing him perform live. Amy never knew they were ever more than acquaintances.

“You have to tell me something about you guys together,” Amy said. “To make up for keeping the secret from me.”

I’d known this was coming, but I was still getting used to the idea of sharing this secret. It was going to have to come out in a trickle at first. “One of his songs is about me.”

She came to a dead stop and socked me in the arm. “Shut up. Which one?”

I laughed, for real this time, finally succumbing to the cold and putting on my coat. “Do you know Sunny Girl? He didn’t play it tonight.” I was relieved he hadn’t. A few tears were one thing. That song might end with me in a puddle of my own emotion.

“Straw blonde hair and a smile that never dies? That’s supposed to be you?”

Everything that had been funny a moment ago was now heavy with irony. Of course my sister didn’t see me as Sunny Girl. No one but Eamon ever had. “Believe it or not, yes.”

“Yeah, well, Gloom and Doom Girl doesn’t have the same ring to it.”

“Funny. That’s funny. I feel like I’m seeing you in a whole new light.”

“I was different with Eamon. I don’t know how else to say it.”

She nodded. We slowed our pace, even though it was cold. It was like neither one of us wanted the night to end, which was a little silly since we live together, but I didn’t say anything. I knew she’d text Luke the minute we got home and that would be the end of the conversation.

“Didn’t you feel different when you left home and went to college?” I asked. “I know I did.” Going off to school had been a difficult decision for me. I’d spent eight years taking care of my dad and sister. It made me feel guilty to leave and not just because I wouldn’t be there to make dinner or do the laundry. The truth was that I’d formulated my escape, starting the day the high school guidance counselor spoke to us about planning for college. She gave a talk about good grades, scholarships, and study abroad. She spoke of independence and getting away. That was all I’d needed to hear. From that moment, I hit the books, but I didn’t tell a soul why I was studying so hard. There was no money to send me to college. If I wanted out, and I did, I knew I was going to have to work my way there.

“Exactly. I was just glad I didn’t have to be one of the poor Fuller girls anymore. I could just be Katherine Fuller, Co-ed.”

“He wasn’t a rock star then. Not even close.”

“Seriously. We had no money. He worked part time as a carpenter just so he could pay for his flat, but otherwise he spent all of his time writing music and trying to get a record deal.”

We walked for nearly an entire cross-town block in silence before she asked the question, “He doesn’t know, does he?”

Amy didn’t have to say that she was talking about Mom and the accident. “No. He doesn’t.” I was in high school when I’d stopped telling anyone about it. I couldn’t keep reliving it, and everyone always wanted the gruesome details.

“Yeah. I still haven’t told Luke. There’s never a good time to bring it up.”

I could relate, although with Eamon, it’d been a case of not wanting to ruin something perfect. Being with him was like waking up each morning to a blanket of fresh snow on the ground. A single footstep would destroy all that beauty. 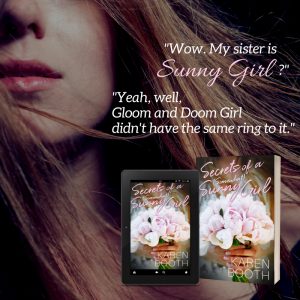 With divorce and infidelity hanging from nearly every branch of her family tree, Katherine Fuller sees no point in marriage. Boyfriends? Sure. Sex? Of course. Wedding vows? No, thanks. Still, when her younger sister Amy gets engaged, Katherine gathers all the enthusiasm she can. She won’t let Amy down. She’s done enough of that for a lifetime.

As the sisters embark on wedding plans, Katherine’s college love resurfaces. It nearly killed Katherine to part from sexy Irish musician Eamon more than a decade ago, but falling under his spell a second time forces her to confront everything she hid from him. The secrets surrounding her mother’s death are still fresh and raw in her mind, but one has haunted her more than the others. She can’t bear to tell anyone, especially not Amy. It could ruin far more than a wedding. It might destroy a sister’s love forever.

Karen Booth is a midwestern girl transplanted in the South, raised on ‘80s music and repeated readings of Forever by Judy Blume. An early preoccupation with rock ‘n’ roll led her to spend her 20s working her way from intern to executive in the music industry. When her kids came along, she traded late nights for early mornings, writing contemporary romance and women’s fiction. Karen was a finalist for RT Magazine’s Series Romance of the Year and Gold Seal of Excellence, and the 2018 National Excellence in Romance Fiction Award. Her books have been translated into seventeen languages.