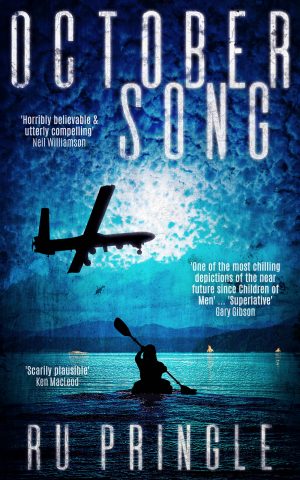 October Song began life in what’s probably an unusual way: as an idea for a screenplay, written for an actor I know (who subsequently became my girlfriend). The plan was to write a punchy short thriller that could be shot making use of the wonderfully cinematic scenery of the west coast of the Scottish Highlands not too far from where both of us live. I’d only written a few pages when it struck me that what I was writing was crying out to be made into a novel. I’m in the doghouse now somewhat because I still haven’t written the screenplay – though I’ve promised to make it up to her by writing something else, and, much to my relief, she adores the book.

I can’t say too much about the story for fear of spoilers, but it’s a pretty dark thriller, set a few years from now in the north of Britain, with the island – and the world – in turmoil because of a rapidly changing climate and the consequent migration of billions of people. Its protagonist is a complicated character: angry and deeply scarred, but compassionate and fiercely loyal to what she thinks is right, even though she doesn’t always do the right thing. She’s a survivor, to an extent that no one, least of all her, realises at the beginning of the book.

The story begins with her fleeing a state manhunt, and follows her journey and those of the team tracking her down. Other characters have crucial roles, and I had a lot of fun writing them – particularly the brilliant but ever-so-slightly obsessive Mi5 officer on her tail, and a decrepit alcoholic who gets roped into the chase simply because he owns a boat.

Though firmly a thriller, there are love affairs near the book’s heart: not all of them between people. On one level it could be seen as a modern Romeo and Juliet, with incompatible ideologies taking the place of Montagues and Capulets. It’s also a musing on belonging, and what it means to different people in a changing world. As well as, hopefully, a rollicking good, fast-paced read!

Ru has been writing regularly since his late teens, mainly for newspapers and magazines. He began his first novel (Santuary, which he’s editing for release next year) when he was 23, and published a hiking guide book shortly afterwards, followed by short stories and contributions to various non-fiction books and anthologies. His first published novels were A Time of Ashes and Hunting Gods, parts one and two of the (broadly) epic fantasy saga Fate and the Wheel, which came out earlier this year. Ru says, “People who’ve read October Song are already badgering him for a sequel – he did enjoy writing it, so if the response is good, he’ll give it serious thought!” 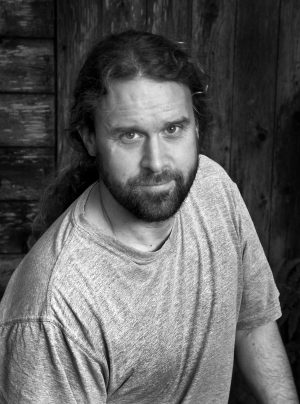 You can find Ru:

‘An absolute piledriver of a dark future thriller that instantly hooks you and doesn’t let go till the end. Horribly believable and utterly compelling.’ Neil Williamson, author of The Moon King.

‘Reads like a perfectly structured thriller, but filled with the same rage against the political-military establishment that nestled deep in Iain Banks’ heart. Its combination of a gritty noir aesthetic with one of the most chilling depictions of the near-future since Children of Men results in a work of superlative readability.‘ Gary Gibson, award-nominated author of Angel Stations.

Following a devastating bomb attack outside the North British Council Building at Holyrood in Edinburgh, a police officer finds herself fleeing from her employers and MI5, the domestic counter-intelligence and security agency of the United Kingdom, up the west coast of the territory of North Britain towards the front line of an intensifying war.

But it’s not just her pursuers she must beware of. The wild coastline has become a hiding place for desperate boat-borne refugees. Meanwhile, someone unknown seems to be going to extraordinary and ever more lethal lengths to stop her pursuers finding her.

October Song is both a dark roller-coaster ride and a blistering reflection on a world on the edge of collapse.

‘The little electric hatchback had vaulted cleanly over a drystone wall, mangling itself as it ploughed a furrow down a steep bank, flipping on to its side as it hit a half-buried boulder and slamming to a stop against a tree. As she sat suspended, watching airbags deflate, she could hear police sirens approaching. She didn’t dare move. Perhaps three minutes later, a police convoy screamed past. As if it would help her, she sat stock still as the sirens were killed. Flashing red and blue lights illuminated tree-tops where the vehicles had pulled up a few hundred metres further on.‘

‘As she drifts into the narrows there’s a noise from downwind, somewhere in front of her. She squints into the dark and raises her binoculars again. What the …? Some kind of battle is taking place on the bridge. Breathing very fast, she strains for details. Even in moonlight, it’s too dim for her night vision to make out much. There’s a scrum of movement, and a growing roar of voices. And clanging – lots of clanging. Also thumps, like haunches of meat being dropped on a floor. She sees a flash of something bright and metallic. There are screams. Something falls noisily off the bridge right in front of her, barely three kayak lengths away.‘