Audiobook review: How to Claim an Undead Soul 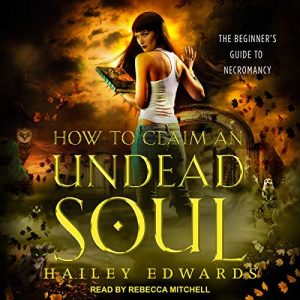 Picking up shortly after the conclusion of the first book, How to Claim an Undead Soul opens with Grier starting her necromancy lessons with Linus. And although she doesn’t need the money now that her inheritance has been restored, Grier wants a job to keep herself occupied. Starting a new job fixing up a soon-to-be haunted tour cruise ship, Grier discovers something wonky with Savannah’s spirits. Now it’s up to Grier and her friends to set things right.

After enjoying the first book in the Beginner’s Guide to Necromancy series and being left with so many questions, I eagerly jumped into How to Claim an Undead Soul. While I did mostly enjoy the standalone parts of the book, with Grier trying to discover what was happening to the ghosts around Savannah, I was disappointed with the lack of forward progression with overall arc.

What I liked: I enjoyed learning more about Grier and adore her relationship with her sentient home, Woolly. I found the magic behind necromancy interesting and want to learn more. I am intrigued by Grier’s mysterious past and want her to uncover the truth of her origins.

Unfortunately, there were several things I had issues with over the course of the book. Rather than give a laundry list of specifics, I will summarize my concerns by saying that I felt the book wasn’t well put together. There are scenes in the book that felt like filler material and could have been edited out; especially when something was mentioned, and then never brought up again. I also struggled with the lack of background information provided in the narrative. There is clearly a strict hierarchy among necromancers and the undead, and I want to understand it. I need to know why there is so much animosity between the classes and why it is so important to remain in good favor. Finally, I am not fond of the whole romantic storyline. It’s hard for me to get behind Boaz as a boyfriend when he constantly calls Grier Squirt, and it’s unclear if Linus is supposed to be a romantic interest, which creeps me out since he’s sort of her cousin.

Narration: How to Claim an Undead Soul is told in the first person narrative from Grier’s POV.  I continue to label the performance as partially voiced; there is a uniform voice for the narrator, which is the same as Grier, while some of the supporting characters have distinctive to partially distinctive voices. While I’m still not a huge fan of Rebecca Mitchell, her cadence and voice has become part of Grier, and I was more used to it this time around. However, I still got confused as to which character was speaking during heavy dialogue scenes, especially if it involved two females.

In the end, the small inconsistencies, red herrings, and extraneous storylines weighed down my enjoyment of How to Claim an Undead Soul. I will give the next book a chance, because I’ve heard such good things, and I genuinely want to know where the story is headed. However, I will need more from the next book to keep me hooked on the Beginner’s Guide to Necromancy series.

My Ratings:
Story: C
Narration: B-

Life was simpler for Grier when she was flat broke and a social pariah. Now she’s carrying the baggage that goes along with the title of Dame Woolworth, and shouldering that weight is giving her a serious crick in the neck. Her work as a Haint is the one thing that makes her feel normal, but even that’s more paranormal than usual.

Spirits are vanishing from well-known hot spots on the ghost tour circuit, and vampires are turning up as shriveled husks. When Grier stumbles across the menace preying on Savannah’s supernatural community, what she uncovers is bigger than a few flickering lampposts gone dark. It’s a deadly threat unleashed by one of their own, and the cost of saving her city might be her life.