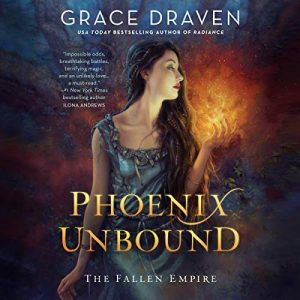 Phoenix Unbound is the first in Grace Draven’s new Fallen Empire series. While I’d classify the book as fantasy, there is a captivating romantic storyline between the two main characters, Gilene and Azarion. Tossed together due to horrific circumstances, the pair overcomes the odds to live a free life. But they don’t start out as compatriots, or even friends, and their journey is long and hard-fought.

Ms. Draven builds her world with sweeping brushstrokes, painting a picture of the cruel, blood-thirsty Empire. Readers quickly come to understand the horrendous nature of this world as we follow Gilene, a fire witch, through her fifth Rites of Spring. Gilene is able to survive the annual practice of burning young woman by using her magic to hide her looks and wield the flames to keep her safe. But the prime gladiator, Azarion, is able to see through her magic, and realizes she’s his way to escape the Empress’s cruel hand and reclaim his birthright.

The author adds layers to her world once Gilene and Azarion escape their prison and begin their journey to his homeland, showcasing the various lands and peoples the pair comes across. The world, with all of its facets, is fascinating. Yet, it’s Azarion’s homeland and the Savitar people, with their beliefs grounded in a fire goddess and their nomadic lifestyle, that captivated me most of all. I found the power plays within Azarion’s clan absorbing and the entire political system interesting.

While action-packed, the story moves slowly at times. However, the pace suits the story, and I enjoyed the one-on-one time Gilene and Azarion spend together. The author does a great job developing the pair’s feelings over the course of the book. Both Azarion and Gilene change out of mutual respect and desire. I appreciate that Ms. Draven doesn’t sugar coat their issues nor does she create sudden changes of heart. It’s something that happens organically, beautifully, because each takes the time to listen and learn how to put the needs of the other first.

Narration: Phoenix Unbound is shared from the third person POV of the two main characters, alternating back and forth throughout the book. Ms. McEwan performs the entire story, using a single narrative voice, regardless of the POV. She has an English/British (?) accent, which is enjoyable to listen to while it reenforces the fact that this story is not of our world. I would call her work Partially Voiced, keeping the narrator constant while giving a slight alteration for Azarion and Gilene in the dialogue. The other characters also have well-suited voices and everything varies just enough to be able to differentiate who is who.

Phoenix Unbound is a wonderful blend of epic fantasy, dynamic world building, and a beautifully crafted slow-burn romance. The sweeping tale shares the personal journeys of two individuals, each on their own path, who only together can they find success and personal growth. Overall, I loved listening to the story, and I look forward to more from this exciting world.

My Ratings:
Story: A
Narration: A-

Every year, each village is required to send a young woman to the Empire’s capital–her fate to be burned alive for the entertainment of the masses. For the last five years, one small village’s tithe has been the same woman. Gilene’s sacrifice protects all the other young women of her village, and her secret to staying alive lies with the magic only she possesses.

But this year is different.

Azarion, the Empire’s most famous gladiator, has somehow seen through her illusion–and is set on blackmailing Gilene into using her abilities to help him escape his life of slavery. And unknown to Gilene, he also wants to reclaim the birthright of his clan.

To protect her family and village, she will risk everything to return to the Empire–and burn once more.