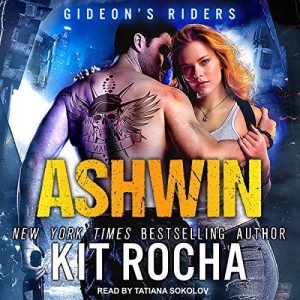 Ashwin is the first story in Kit Rocha’s Gideon Rider’s series. While the series is a spinoff of the authors’ hugely popular Beyond series, the books are standalone romances, and knowledge of the previous series is not needed for enjoyment (I didn’t read it.). The series is set in a post-apocalyptic/dystopian world following a war for freedom from the wealthy central city, Eden, whose power and corruption caused the war with the outlying sectors. Gideon and his family rule Sector One, which is based on a religion of love and giving. Gideon’s Riders have sacrificed their afterlives in order to serve as protectors to the royal family.

Kara, a medic who defected from the Base in Eden, has been adopted into Gideon’s family as one of their own. She still morns the death of Ashwin, a genetically altered Makhai soldier who died in the war. She continues to wonder if he really did feel something for her, even though feelings are conditioned out of the Makhai.

Ashwin underwent six months of intense and brutal reconditioning after he nearly went mad over Kara’s safety. Now he’s out and the Base has ordered him to infiltrate Gideon’s Riders. Once he sees Kara again, he knows his conditioning will never hold, but this time, he doesn’t care.

Overall, I enjoyed Ashwin and learning about Gideon’s Riders and the world they inhabit. Sector One’s love-based religion and the kind ways of its citizens allow for all types of people to coexist while giving others the second chance they need to be happy. Such is the case with Ashwin; he learns to care without obsessing and how to trust the Riders. Kara soothes him, allowing him to be both protector and lover. I also enjoy how open and honest Gideon is – his straightforward ways ensure misunderstandings are not the reason for conflict.

One thing I noticed is the large volume of introspection by the individual characters when it is their POV, for example in the middle of a conversation or action. While it provides the listener with incredible insight into the character’s psyche, after a while I kept thinking how in real life, that person would be staring off into space while thinking away, leaving the others wondering what was going on. Additionally, the way that Ashwin is allowed to stay in Sector One comes a bit easy, but it works for the story.

Narration: the book is shifting 3rd person POVs between Kora and Ashwin, and additionally a few other supporting characters. The narrator uses a neutral feminine voice at all times, and it is easy to follow and pleasing to listen to. Ms. Sokolov alters the voices for each character during dialogue. Each voice is mildly distinctive. The male voices are appropriately deeper and not too feminine; however, Ashwin and Gideon and other males sound similar. The female voices are similar to the narrator, but distinct enough to separate out. The voices are easier to pick out because of narrative tags and how the dialogue is written.

Overall, I enjoyed my first look at Sector One and Gideon’s Riders. I have already picked up the second story which focuses on another of the Riders.

Lieutenant Ashwin Malhotra is a Makhai soldier–genetically engineered to be cold, ruthless. Unfeeling. His commanding officers consider him the perfect operative, and they’re right. Now, he has a simple mission: to infiltrate Gideon’s Riders, the infamous sect of holy warriors that protects the people of Sector One.

He’s never failed to execute an objective, but there’s one thing he didn’t anticipate–running into Dr. Kora Bellamy, the only woman to ever break through his icy exterior.

When Kora fled her life as a military doctor for the Makhai Project, all she wanted was peace–a quiet life where she could heal the sick and injured. The royal Rios family welcomed her like a sister, but she could never forget Ashwin. His sudden reappearance is a second chance–if she can manage to touch his heart.

When the simmering tension between them finally ignites, Kora doesn’t realize she’s playing with fire. Because she’s not just falling in love with a man who may not be able to love her back. Ashwin has too many secrets–and one of them could destroy her.