Audiobook review: How to Save an Undead Life 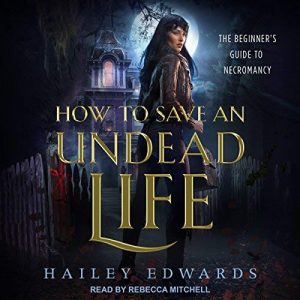 I’ve been “dying” to read Hailey Edwards for years, so I jumped at the chance to review the audiobook of her latest series, Beginner’s Guide to Necromancy. The series revolves around Grier Woolworth, a magic wielder once training to be a necromancy-assistant with her adopted mom, Maude Woolworth, now trying to make ends meet as a tour guide of haunted sites in Savannah, Georgia. Grier was wrongly convicted of brutality murdering Maude and locked away in the Society for Necromancy’s most severe and brutal prison without a trial. Stripped of her inheritance, Grier was released and is trying to get her life back together when a powerful vampire shows interest in her.

How to Save an Undead Life sets the scene and tone for the urban fantasy series. The world is unique and original, both exciting and a bit confusing at times. The author shares her world by dropping the listener directly into the story, rather than building up the backstory and slowly creating the world. Overall, I like this method of storytelling; however it can cause confusion. For example, the opening is filled with a ton of details, but rather than painting a vivid picture for me, they seem to swirl around me quickly and leave me confused as to what is going on. After a couple chapters I was able to piece together more about necromancers, who Grier is, and identify the primary supporting characters. The book is a complete story, but I’m left with many unanswered questions and not one-hundred percent certain I understand all the moving parts.

While I’ve enjoyed books narrated by Rebecca Mitchell, I’m not quiet a fan of her voice and narrative style. It worked for the sci-fi adventure Terminal Alliance, but not as much here. She uses a partially-voiced narrative (link to post on narrative styles), and I felt the lack of distinction between character voices caused confusion over who was speaking at times. Additionally, I noticed during heavy dialogue scenes there is a lack of dialogue tags. Whether the book is written this way, or if it was edited for audio format, it simply added to the confusion because the individual voices weren’t distinct enough. Finally, there are times when Grier thinks passages during her dialogue, and I was never certain what she was actually speaking versus thinking. Generally, I prefer each character to have a unique voice, and Ms. Mitchell doesn’t provide much variety.

Despite my issues with the narration, I still enjoyed How to Save an Undead Life once I got into it. As I mentioned, the world is unique. Grier has a few great friends who will stand by her through thick and thin, and a sentient home that protects her. It’s clear that there is an important story buried in Grier’s past (and I have my guesses), but those facts are left for another book. I look forward to listening to the next story.

My Ratings:
Story: B
Narration: B-

Grier Woolworth spends her nights weaving spooky tales of lost souls and tragedies for tourists on the streets of downtown Savannah. Hoop skirt and parasol aside, it’s not a bad gig. The pay is crap, but the tips keep the lights on in her personal haunted mansion and her pantry stocked with ramen.

Life is about as normal as it gets for an ex-necromancer hiding among humans. Until the society that excommunicated Grier offers her a second chance at being more than ordinary. Too bad no one warned her the trouble with being extraordinary is it can get you killed.

Warning: This book contains one ex-con/ex-heiress with a pet zombie parakeet who lives next door to her ex-army/ex-crush. Brace yourselves, we’re talking more exes than a pirate treasure map here.