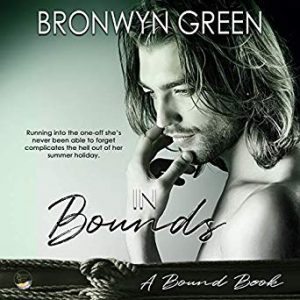 In Bounds is the sixth story in the loosely-related Bound series, and I’ve enjoyed “re-reading” each of the books via audiobook format. Having originally read In Bounds back almost two years ago, I found I’d forgotten key aspects of the story, which made the listen more fun in some ways.

Having recently discovered her husband is having an affair (and child) with one of her students’ mother, Ivy is spending the summer overseas tutoring best friend Charlotte’s children. But when Charlotte has a family emergency that sends the whole family to the States, Ivy is left dealing with her attraction to Charlotte’s younger brother, Will. Will wants Ivy and is wiling to play dirty to keep Ivy in country and in his bed.

From my original review (December 2016):

“In Bounds is another wonderful, sexy romance in the Bound series, a set of loosely connected, standalone BDSM-lite stories from Bronwyn Green and Jessica Jarman. I love that the books, In Bounds included, embrace healthy relationships, focusing on couples that enjoy sex and exploring mutually satisfying kinks. While there may be bumps in the road and issues to overcome, they don’t dominate the pages of the story.

Overall, I adored Ivy and Will, and enjoyed their story. The author puts the focus on the romantic storyline, giving it heart. Will was perfect, maybe a bit too perfect and understanding, but that’s just what Ivy needed and deserved. In Bounds warmed my heart and put a smile on my face.”

Narration: In Bounds shares its story from the alternating third person POVs of Ivy and Will. Overall, both had please voices and did a solid job going back and forth between American and British accents. Mr. Diamond’s American female is slightly better than Ms. Eaton’s British male,  but both do a decent job switching tone for gender and accent for country of origin. I did feel that Ms. Eaton’s version of Will clashed a bit with Mr. Diamond’s version because his is easy going, and deep; whereas Ms. Eaton’s version sounds prime and proper, and of course, more feminine.

My biggest issue was with Ms. Eaton, who used long pauses between every “paragraph.” In fact, it was so long that at times, I thought the story was breaking for a new chapter. I ended up listening to the book at 1.5x speed, which helped the pausing issue, but wasn’t the best playback speed for Ms. Eaton’s dialogue and narration. Mr. Diamond, who narrated the previous story in the series, works well at 1.5x playback speed.

In the end, I enjoyed listening to In Bounds. Hearing the story come to life adds a dimension to the story you don’t get when reading it.

Her summer holiday just got a hell of a lot more complicated. Ivy Wright knows several things to be true: Marrying a guy who can’t keep it in his pants is a terrible idea. So is having a drunken, secret one-night stand with her best friend’s little brother. And catching a soccer ball with one’s face never works out well for anyone. When all three collide, what was supposed to be a relaxing vacation in the English countryside becomes unbelievably awkward not to mention sexually charged.

While recovering from a potentially career-ending injury, English football player, Will Darby, runs into the one woman he’d given up hope of ever seeing again. No longer chafing at being sidelined, Will is a man on a mission. He’s never forgotten his one and only night with Ivy, and their attraction is stronger than ever.

Convincing her to give him a chance is only the first hurdle. Getting her to admit her kinks and let him give her what she needs physically and emotionally is another, but is their connection enough when her secrets keep pushing them apart?