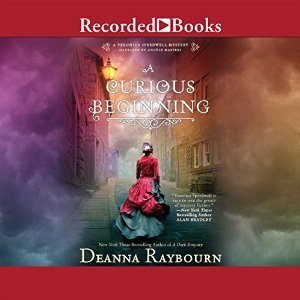 The book opens with Veronica Speedwell burying her spinster aunt guardian. Preparing to leave her small village and make her way out into the world, Veronica stumbles across a miscreant ransacking her cottage. One who tries to kidnap her, until a mysterious stranger steps in. Trusting her instincts, she sets off to London with the Baron. Along the way, she finds out that this man knew her long dead mother. The Baron Max then entrusts her safety to Mr. Stoker. Shortly after, the Baron is murdered, and Veronica and Stoker find themselves in the middle of a conspiracy so large, it threatens the monarchy.

A Curious Beginning is a wonderful historical mystery. The journey itself was interesting and exciting. I loved learning more about Veronica and watching her as she learned more about herself and her parents. The play between Stoker and Veronica is thrilling, and with a hint of sexual tension: it keeps me wondering will they or won’t they. The mystery itself is well thought out and of dire enough consequences that it will keep Veronica a person of interest for a while.

The narration is lovely. Told from first person POV of Veronica, the clipped, educated cadence suited her independent character. I felt as if I was in Veronica’s head. Her dialogue voices for other characters are each unique and identifiable. Male voices deep and masculine. Accents all adjusted to fit the socio-economic status of each individual. 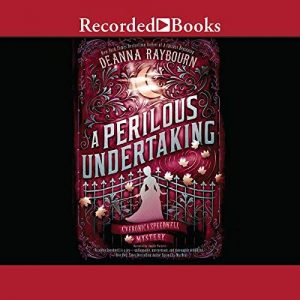 After gaining employment and a place to live with their benefactor, Stroker and Veronica spent the summer planning a large expedition with the Lord of the manor. However, the day before they were to leave, he was injured and had a call off the expedition. That same day, Lady C invites Veronica to the Curiosity Club. There she is introduced to a Lady Sundridge who actually is the princess Louise; Veronica’s aunt. She begs for help solving the murder mystery of one of her commoner artisan friends. Once again, Stoker and Veronica find themselves in a plot that could unravel the monarchy.

The mystery: sleuthing, solving, and all, is well laid-out, and I highly enjoyed watching Veronica and Stoker put together the pieces. They think outside the box and are willing to go the extra steps to see justice served. The pair is so much alike yet quarrel at every turn. I love the “whatever it is” between Veronica and Stoker. It adds dimension and heart to an otherwise excellent mystery. We learned so much more about both, including background, history, and character development.

The narration by Ms. Masters is nearly perfect. Her range of accents is excellent and sound authentic to this untrained ear. She nails Veronica’s no nonsense attitude. Yet there is also a vulnerability that comes through. Her male voices are strong and unique. Each character is identifiable just by voice alone.

A Perilous Undertaking is a wonderful and solid second story in the Veronica Speedwell mysteries. It’s the perfect blend of historical mystery and character-driven supporting plotlines. The excellent team work between the pair and the sexual tension adds so much. Their friendship is dear.

A Curious Beginning:
London, 1887. As the city prepares to celebrate Queen Victoria’s golden jubilee, Veronica Speedwell is marking a milestone of her own. After burying her spinster aunt, the orphaned Veronica is free to resume her world travels in pursuit of scientific inquiry – and the occasional romantic dalliance. As familiar with hunting butterflies as she is fending off admirers, Veronica wields her butterfly net and a sharpened hatpin with equal aplomb, and with her last connection to England now gone, she intends to embark upon the journey of a lifetime.

But fate has other plans, as Veronica discovers when she thwarts her own abduction with the help of an enigmatic German baron with ties to her mysterious past. Promising to reveal in time what he knows of the plot against her, the baron offers her temporary sanctuary in the care of his friend Stoker – a reclusive natural historian as intriguing as he is bad-tempered. But before the baron can deliver on his tantalizing vow to reveal the secrets he has concealed for decades, he is found murdered. Suddenly Veronica and Stoker are forced to go on the run from an elusive assailant, wary partners in search of the villainous truth.

A Perilous Undertaking:
London, 1887 . . Victorian adventuress and butterfly hunter Veronica Speedwell receives an invitation to visit the Curiosity Club, a ladies-only establishment for daring and intrepid women. There she meets the mysterious Lady Sundridge, who begs her to take on an impossible task saving society art patron Miles Ramsforth from execution. Accused of the brutal murder of his artist mistress Artemisia, Ramsforth will face the hangman’s noose in a week’s time if Veronica cannot find the real killer.

But Lady Sundridge is not all that she seems and unmasking her true identity is only the first of the many secrets Veronica must uncover. Together with her natural historian colleague Stoker, Veronica races against time to find the true murderer a ruthless villain who not only took Artemisia s life in cold blood but is happy to see Ramsforth hang for the crime.

From a Bohemian artists colony to a royal palace to a subterranean grotto with a decadent history, the investigation proves to be a very perilous undertaking indeed….