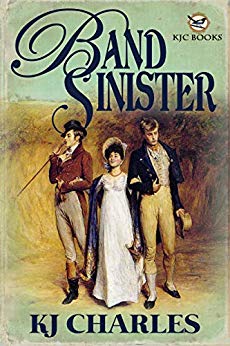 I first read KJ Charles after seeing too many ardent recommendations from both other authors I adore and fellow readers whose opinions I value. A good number of her titles are now among my favorites, and I stopped bothering to resist pre-ordering any new releases some time ago. Band Sinister, with its promise of gleeful unseemliness, blasphemy, impertinence, humor, and sex, was likewise acquired enthusiastically. And it was every bit as wonderful as I’d hoped.

Though all of the inhabitants and guests of Rookwood Hall shine vibrantly enough to stake a significant claim on their part of the story, Band Sinister primarily revolves around Guy Frisby and Sir Philip Rookwood. Born to sufficient wealth and social standing to make him nearly unemployable, Guy and his sister, Amanda, bear the shame of the carnal sins of their mother, the financial mishandling and alcoholism of their cuckolded father, and the disapproval and resentment of their well-married aunt—who never hesitates to use their dependency on her against them. The only way things could be made worse would be if they were to become indebted to the younger brother of the man who ruined their family. Which, of course, they do.

Sir Philip Rookwood, bastard and unwilling baronet, has, with the aid of his two best friends, generated an absolutely loathsome reputation in the rural county where his inheritance obliges him to venture every so often. Rumors of devil worshipping, speculation about the ruination of innocent maidens, and a general determination not to mingle with the neighbors have made him a most unattractive candidate for local fathers with marriageable daughters. The situation would be moderately enjoyable if not for the arrival of the severely wounded Miss Frisby and her exceedingly tempting brother.

At its heart, Band Sinister is a story about connections and the unique shape every incarnation of love might take. Families made are at least equal to, if not far stronger than, those of birth within the narrative, their intertwining complexities at once fluid and lovely and ruthless and unshakeable. Sex itself is beautifully presented as an independent facet of a deeper relationship, rather than its imperative.

Another important correlation that is addressed in Band Sinister is that of wealth to power—those that have it and those in subjugation to it. All the major characters do battle in different ways against society’s reliance on status as part of a larger commentary about privilege and a lust for power that destroys all it touches—a grossly imperfect machine that must constantly be fed at the expense of others. In the world of Band Sinister, ruination and independence seem far more synonymous than they ought to be.

Filled with swoony goodness, Band Sinister was the most fun I’ve had reading in a while. Philip and crew are extraordinary creations, as are Guy and Amanda, and watching Guy awaken in their company was even more satisfying than I imagined it would be. By bringing the wide world into Rookwood Hall, all their lives are altered for the better, despite the ever-present shadows of privilege and obligation. Even in the often-limited field of books that breathe, Band Sinister made its mark. It’s one I want for my bookshelf now, and I’m keeping my fingers crossed for an audiobook at some point in the future.

Guy Frisby and his sister Amanda live in rural seclusion after a family scandal. But when Amanda breaks her leg in a riding accident, she’s forced to recuperate at Rookwood Hall, where Sir Philip is hosting the Murder.

Guy rushes to protect her, but the Murder aren’t what he expects. They’re educated, fascinating people, and the notorious Sir Philip turns out to be charming, kind—and dangerously attractive.

In this private space where anything goes, the longings Guy has stifled all his life are impossible to resist…and so is Philip. But all too soon the rural rumour mill threatens both Guy and Amanda. The innocent country gentleman has lost his heart to the bastard baronet—but does he dare lose his reputation too?