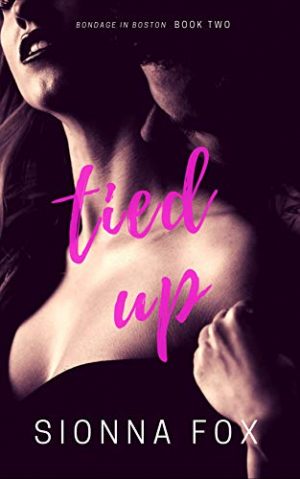 Tied Up
Author: Sionna Fox
Reviewer: B.
Rating: B

Oftentimes, a goodbye is my favorite kind of beginning, and Tied Up fits that description with unexpectedly tempting ruthlessness. What follows is a kaleidoscope of resentment and guilt, punishment and sex, and forgiveness and love. Not just about the manifestation of particular kinks in the bedroom, Tied Up explores a highly complex relationship on the edge of either demise or rebirth, and it wasn’t entirely clear which way the lever would tilt until the very end.

Told from Ian’s perspective as well as Kate’s, I couldn’t help becoming equally invested in both characters as Tied Up progressed. The author resumes the narrative after the prologue with Kate’s side of the story, and I found myself sympathizing with her fairly easily. However, once the POV shifted to Ian, felt just as badly for him. The truth is, they each made a lot of mistakes, and the process of not only admitting that fact to themselves, then dealing with the aftermath, was difficult (and occasionally exhausting) to read.

Emotionally and psychologically, there’s a lot going on in Tied Up to ponder. Age differences, economic disparity, a rushed cohabitation, all bear relevance to the situation, in addition to the question of comfort vs. complacency that seeped its way into their D/s relationship. Even more obvious questions about how to combine separate, unique lives without sacrificing the individuals themselves come into play, as well. One of my favorite things about Tied Up is that it calls particular attention to the overall wellbeing of both partners, and the dangers of ignoring the warning signs of trouble in favor of shoring up the perceived characteristics of the roles Ian and Kate have undertaken.

This wasn’t an easy read for a few reasons, and I couldn’t help feeling that I’d have been fine if the ending hadn’t given the characters their HEA. While I was glad that their problems forced them into a state of (eventually) BS-free introspection, I admit I had some difficulties remaining impartial, and more than once caught myself questioning who “deserved” who. But, I believe the story is about much more than that, and I was pulled out of the narrative—although rarely—as a result.

As the second in the Bondage in Boston series, I highly recommend reading the previous story, Bound To, first. These characters are all part of a chosen family of friends, and I believe understanding the connections between them all will make the series as a whole more enjoyable. Kate and Ian have more to unpack than a lot of fictional partners seem to—including some fairly horrible misunderstandings and other disasters. Along the way, they both learn that some people change, while others pretend to be something they’re not, and that perhaps no one should be surprised to realize that they don’t know themselves nearly as well as they thought they did. They certainly aren’t the only ones.

When Kate left Boston a year ago for a coveted spot on a research team across the country, she thought she had severed her ties to Boston—and to Ian—for good. But when she returns to finish her dissertation and make a fresh start, she finds the cool, in control silver fox she thought she knew has been replaced by a different man—one she might want to get to know.

Ian’s carefully ordered life has been in turmoil since the day Kate walked out the door for what should have been the last time. But now that she’s back, he’ll risk anything, and change everything, for a chance to try again.

But while their chemistry in the bedroom has never been better, Kate fears the mountain of unresolved baggage between will come crashing down and destroy their second chance once and for all.

Reviews in the Series:
Bound To by Sionna Fox (Bondage in Boston #1)