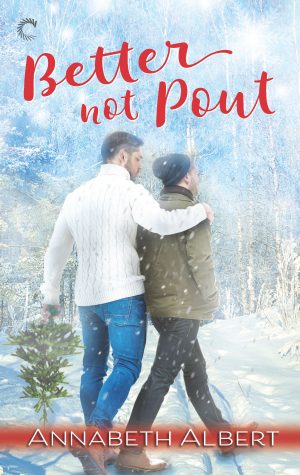 It was entirely possible that standing in Teddy’s office in his drawers was less humiliating than trying to squash himself onto the couch. He narrowly avoided rolling to the floor, but ended up in a sneezing fit because up close and personal, the couch smelled like a combo of woodsmoke and fabric cleaner of some kind. And his neck and thighs were both cramping, but he tried to not groan aloud.

“Yeah. You look totally comfy.” Teddy shook his head at Nick as he finished putting the game away and banking the fire. “Come on. Bed. I’ll even turn on the electric bed warmer for you.”

“We can share,” Nick said decisively. He’d slept next to men on planes and in various mission situations. Surely he could survive the temptation that was Teddy in a warm bed.

“Darn. Can’t blame a guy for hoping?” Teddy gave him a smile over his shoulder as he led the way up to a cozy sleeping loft. A large, high sleigh bed that still looked too small for both of them dominated the room, piled high with colorful quilts. Teddy clambered onto the bed, crawling across it, muttering something about finding a controller but Nick was too transfixed on his bouncing ass to pay much attention to his words. It was surprisingly round and high and rather biteable and…

“See something you want?” Teddy glanced over his shoulder.

Busted. And he must have not been able to wipe the want off his expression fast enough because Teddy crawled back across the bed to kneel in front of where Nick stood, looking like some angelic offering. An offering Nick wasn’t sure he could turn down a second time.

“How about…” Teddy pitched his voice low and seductive, almost a whisper. “I get it, I’m not your type, but maybe I could turn off the lights and you could… I dunno…pretend? Just for tonight?”

“Never said you weren’t my type,” Nick said, voice like sandpaper. True, he’d been thinking just that an hour earlier, but Teddy not being his usual didn’t mean that Nick didn’t see his appeal or that the chemistry wasn’t there. And f**k, it would be so much easier if the chemistry between them didn’t crackle like the downstairs fire. His hand was apparently done taking orders from his brain that evening and reached out to stroke Teddy’s smooth jaw. “Just that it was a bad idea.”

“It’s an excellent idea.” Teddy stretched like a cat under Nick’s touch, eyes drifting shut, like he was every bit as hungry for Nick’s touch as he was to give it. And Nick gave up the fight with a groan. This was a terrible idea for all sorts of good, logical reasons, and things were likely to get awkward, but hell if he could bring himself to stop touching Teddy. He buried his hand in those golden curls, which were far softer than they looked.

And Teddy knew he’d won, closed the remaining distance between them and looped his arms around Nick’s neck. “Now do I get to tell you what I want?”

This time Nick laughed, long and low. “Yeah. You do.”

“Goody.” Teddy beamed at him. “But it’s probably gonna be easier to show you…”

With that, Teddy leaned in, slow enough that Nick could have stopped him if he’d been so inclined. Which he wasn’t. No, he’d made up his mind to have this thing. He’d deal with the consequences—and there would be consequences—like an adult, but for tonight, he was going to let himself have Teddy.

Is it a recipe for disaster? Or a once-in-a-lifetime opportunity for holiday romance?

Teddy MacNally loves Christmas and everything that goes along with it. When he plays an elf for his charity’s events, he never expects to be paired with a Scrooge masquerading as Santa Claus. His new mission: make the holiday-hating soldier believe he was born to say ho-ho-ho.

Sergeant Major Nicholas Nowicki doesn’t do Santa, but he’s army to his blood. When his CO asks an unusual favor, Nick of course obliges. The elf to his Kris Kringle? Tempting. Too tempting—Nick’s only in town for another month, and Teddy’s too young, too cheerful and too nice for a one-night stand.

The slow, sexy make-out sessions while Teddy and Nick are alone and snowbound, though, feel like anything but a quick hookup. As a stress-free holiday fling turns into Christmas all year round, Teddy can’t imagine his life without Nick. And Nick’s days on the base may be coming to a close, but he doesn’t plan on leaving anything, or anyone, behind.

Annabeth Albert grew up sneaking romance novels under the bed covers. Now, she devours all subgenres of romance out in the open—no flashlights required! When she’s not adding to her keeper shelf, she’s a multi-published Pacific Northwest romance writer. Emotionally complex, sexy, and funny stories are her favorites both to read and to write. Her critically acclaimed and fan-favorite LGBTQ romance series include the #OutOfUniform, #Gaymers, #PortlandHeat, #RainbowCove and #PerfectHarmony series.

To find out what she’s working on next and other fun extras, check out her website: annabethalbert.com or connect with Annabeth on Twitter, Facebook, Instagram, and Spotify! Also, be sure to sign up for her newsletter for free ficlets, bonus reads, and contests. The fan group, Annabeth’s Angels, on Facebook is also a great place for bonus content and exclusive contests.

Win 1 of 2 e-copies of any OUT OF UNIFORM series book or a finished Paperback copy of BETTER NOT POUT!