Layla Reyne’s action-packed male/male romantic suspense series, Trouble Brewing, continues this winter with NOBLE HOPS. Get an exclusive sneak peek below at the final book of the series, out February 11, 2019 in e-book and audio and February 26, 2019 in paperback. 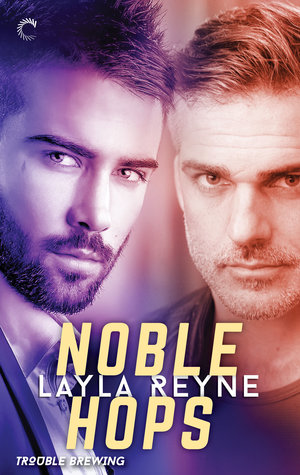 “Aidan and Lauren are here.”

Cam reached for him, with a “Nic, wait,” but Nic beat him to the door and out of the truck, Cam’s muttered, “Damn it,” echoing behind him. Cam caught up with him before he made to it Aidan’s car, drawing him around with a hand at his elbow. “This isn’t over.”

Nic chuckled, Cam’s persistence a comfort as much as it was a menace. “I didn’t figure it was, Boston.”

“Not to keep things on the case from you.”

“And now this may be related.”

Cam’s serious agent face broke, a smirk to match. “I do question witnesses for a living.”

“You’re also good at knowing when to let up, when to play good cop.”

Cam’s smirk grew into a smile, dark eyes warm as he rested a hand on his chest. “No, that’s just me being a good boyfriend.”

Cam waggled his brows, and Nic pushed him back playfully, but not so far he couldn’t grab his boyfriend’s hand, walking together to meet Aidan and Lauren.

Lauren reached into her purse and pulled out a bottle of Maker’s. “Is it one of these sorts of dinners?”

“I watched The Wire too, but I wasn’t sure if that whole Irish wake thing was real.”

“It’s real,” Aidan confirmed, accent thicker for effect before he reined it back in. “Though we’re not going that far. We have a full day tomorrow.”

Lauren swiped at her bangs and pouted dramatically. “You’re a terrible Irishman. Where do I report this?”

“I’ll be sure to give you the number of the home office.”

They all laughed as they crossed the street. “But first, food.” Aidan glanced up at the open loft windows. “I can smell it from here.”

“Chicken marsala,” Nic said, the aromas of red wine, mushrooms, and seared chicken taking him back to his childhood. It’d always been one of his favorite dishes, second only to Mary’s cioppino.

“Oh God, the marsala we used to get in North End,” Cam said, practically moaning, his accent more pronounced, something that had faded since they’d returned from Boston. Nic realized how much he’d missed it, and how much that trip had changed them, for the better.

Using the hand in his, Nic yanked Cam to a halt. Other hand around his neck, Nic hauled him in, stealing a quick, hard kiss. “You are a good boyfriend,” he whispered against his lips. “I wouldn’t want to go through this with anyone else, or alone.” That’s what the old Nic would have wanted, but the one holding Cameron Byrne’s hand, the one who knew he had someone to call, someone to tell his story to, someone to go home to after a no good horrible day, wanted this man with him, always.

Cam’s dark, heated eyes stared back at him. “I’m with you, baby.”

Don’t miss CRAFT BREW, Book 2 of the Trouble Brewing series, out now in e-book and audio and October 30 in paperback! http://bit.ly/2w9IfEz

Everything Dominic Price has worked hard to uphold is about to come crashing down on everything he holds dear.

So much for the quiet life. Just as assistant US attorney and brewery owner Dominic Price is settling into a comfy new chapter with his partner, FBI agent Cameron Byrne, the sudden death of Nic’s father puts their happily-ever-after in jeopardy. Nic immediately suspects foul play, his prime suspect a notorious gangster his father was indebted to—only now the loan shark is out for blood.

Cam has been longing for Nic to finally let him in on this very personal case. But when Nic’s belief that he’s the sole Price heir is upended, the line between personal and professional starts to blur, leaving Cam unsure of where he stands.

Nic is depending on Cam’s kidnap and rescue expertise to save his recently discovered family member before it’s too late. But with a dangerous threat closing in, the ghosts from Nic’s past cast long shadows. Any relationship could crack under the pressure, but for Nic, finding his family might mean losing the love of his life.