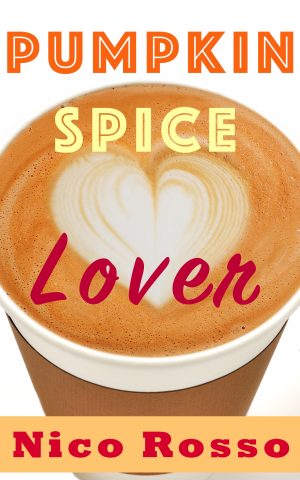 He’d met her in this very coffee shop, with the pumpkin spice swirling all around them. They’d talked a little. They’d left their drinks half finished and hurried to her house and her bed.

She couldn’t shake the feeling that she was back there, tugging his clothes off while his mouth explored the side of her neck. “Alex,” she’d whispered, amazed at how his name had felt in her mouth. “Alex.” He’d been a friend transformed into a forbidden lover. “Alex.” She’d said it one last time after he’d gone, with the futile hope that it would bring him back.

“Alex,” the barista called out.

No way she’d actually said that name. Camila must’ve morphed the syllables to match her memory.

But the man who stepped forward to retrieve his order was as tall and lean as her fantasy. His black hair was close cropped on the sides and longer on top in a tidy wave. It couldn’t be him, angling on nimble feet to avoid the crowd. Moving with the confidence and control she’d felt first hand for only two nights.

The man turned toward her. F**k.

As if the pumpkin spices had conjured him not more than a dozen feet away. But the Japanese-American man was damn real.

He gave a small smile, and raised his cup to toast her, eyes gleaming with awareness. While he took her in, she lit up in each place he glanced. And when he gazed straight into her eyes, she blazed with all of the hunger that she’d foolishly convinced herself had gone away.

Surprisingly, the searing heat from the blush of across her chest didn’t scatter the people in the shop. No one seemed to notice. Except Alex. His look deepened and his jaw set. He licked his lips, but kept a respectful distance.

This was such a bad idea. She wanted to ask the stranger at the next table to tell her with no equivocation that she should not invite Alex over. Camila lifted her cup to Alex and tipped her head toward the empty chair opposite her.

It wasn’t the caffeine that had her heart pounding as he stepped toward her. Memories of the two of them wound together and naked flooded her. Followed by the hour they spent staring at squares of light on her ceiling from a reflected streetlight, finding the shapes of faces or dogs in the contours of the plaster. The thrill of his approach collided with the ache of impossibility at an intersection in the middle of her chest. This couldn’t happen again. Now more than ever.

“Camila.” He smiled around her name and the blush deepened into her skin.

“Alex.” Her pulse roared to drown out all the warnings to stay cool and distant. “I’ll bet this isn’t a coincidence.”

“I was hoping I would run into you here.” He wore a simple black collared shirt, open enough to expose the long lines of his neck. “Text might be too…forward. I left it to the hands of fate.”

She had to look at his hands, strong, with articulate fingers. “Yeah…text…” They’d stopped communicating a few weeks after he’d settled in Chicago. A mutual decision based on the idea they should move on with their lives. Did Alex know how complicated things had become since? She was getting scary good at ignoring those complications right now. “You’re looking good. Doing well?”

“Yeah. Wrapped up a big case this week. A family gets to stay in the States.”

“You do such amazing work.” He beamed, like the glow of pride she was feeling. “How’s the house?”

“No leaks.” Her first winter in the old bungalow had revealed quite a few surprises. “The succulents in the old fountain in the back yard are going crazy.” She’d been tempted to text him photos of the progress. Now that he was in front of her, there was so much she wanted to tell him. It was as if the cinnamon and clove loosened her tongue. “I missed you.”

Her gaze hit his and his face grew serious.

“Can I sit?” he asked, indicating the chair opposite her.

She stood. “What were you hoping fate would deliver to you?”

“Are you seeing anyone?” The Alex she knew wouldn’t mess around like that, but she was too guarded after all this time not to ask.

“No.” She was nearly breathless. “Are you on the clock?”

He shook his head slowly, not breaking eye contact. “Not today.”

“Me neither.” She took her phone off the table and sent a quick text to her boss, who wouldn’t begrudge her a day off after this week’s victory. She collected her purse. “Do you remember the way?”

“I haven’t forgotten anything.” His voice resonated deep.

Clove, cinnamon and nutmeg swirled around her. Alex stood before her. She couldn’t stop and didn’t want to. “Meet me there.”

She walked out of the coffee shop without looking back. If he’d just been a fantasy, a memory brought about by the pumpkin spices, then she would spend the day alone, without passion or drama. If he was real, she’d just invited trouble home. And she couldn’t wait to get there.

Camila Santos thinks she’s iced the memories of the forbidden fling with her brother’s best friend, Alex Ikeda, a year ago, but this autumn’s return of the pumpkin spice brings all the secret passion back in a flood. It also brings Alex back to her, in the same coffee shop where their affair had started, surrounded by the scents of cinnamon, clove and nutmeg.

It’s a risk to see Camila again after a year away, but Alex knows what they’d shared in their white hot tryst holds the potential for so much more. Picking up where they’d left off, he and Camila let their passion loose. But the complications around them have become more twisted than ever, threatening their burgeoning relationship.

Can Alex and Camila fight to keep their chance at love, or will their affair be crushed when the truth comes out?