The final book of this wonderful series…

This month we celebrate the release of the final title: Siren’s Storm by Asa Maria Bradley.

A wolf shifter bent on exposing her secrets, an ex-lover who betrayed her, and a sister asking for an impossible favor, are just some of the things threatening mermaid Theia Ayer’s new covert life.

The Sea King sent her and her sisters to earth to prepare for the return of the merfolk. They must do so without other paranormal creatures finding out who they really are, or they will once again be hunted for their ability to create portals between the realms. Theia is doing a pretty good job of staying under the radar, until a wolf shifter comes sniffing around at her human workplace. He won’t rest until he ferrets out who and what she really is.

As if that wasn’t enough, an old lover arrives wanting to rekindle his and Theia’s relationship. Her heart wants to believe he’s sincere but her mind remembers how he once betrayed her. And his timing couldn’t be worse, because she can’t deal with him or the wolf shifter while also helping one of her sisters hide a powerful magical weapon.

As strange accidents occur at suspiciously frequent intervals, Theia doesn’t know whom she can trust. Especially not when there may be several assailants hunting for the weapon and at least one of them is willing to kill her to get to it. Now, Theia is in the fight of her life as she races to stop the powerful weapon from ending up in the hands of the wrong people. Her failure could mean the end of not just her people, but the start of a massive war that would threaten all creatures that make earth their home. 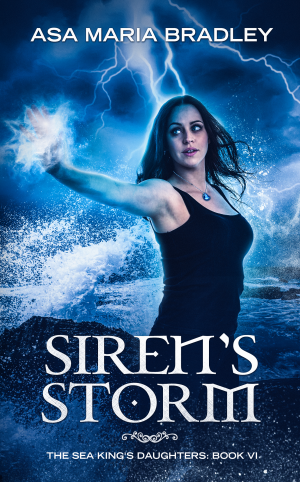 Giddy and naked, I launched myself into the water and lost my breath in the initial shock of sun-warmed skin meets snow-melt water. A beat or two later though, I swum deeper and twirled in a slow corkscrew twist while gripping the small aquamarine stone pendant hanging around my neck. I reached for my magic within and as my legs stretched and fused together, I closed my eyes and savored the sweet sensation of hard inch-long fins popping out along my spine as my feet transformed into a tail fin much smaller, but shaped similarly, to what whales use to propel through the water.

Two razor thin slits on both sides of my neck opened and I no longer had to hold my breath because the gills now filtered oxygen out of the water to fill my lungs. I played for a couple of hours, exploring the depths of the lake while playing tag with small fish and some frogs. I felt extra invigorated as I plunged and summersaulted in the water. Not seeing any other hikers for the two days I’d been in the wilderness, made me careless.

And that is why I didn’t notice the man, or his horse, until I was almost back ashore and popped my head above water.

The appaloosa had a beautiful dappled palomino coat that I got caught up in admiring, so a few heartbeats passed before I noticed the smirk on the rider’s lips. He obviously thought my bare shoulders meant he’d caught me skinny dipping. The fog left my mind and I was instantly sober.

“Howdy,” he touched his western hat in greeting, his blue eyes shining with mirth.

Luckily I’d already changed into my bi-pod shape before I hit the shallow waters closer to shore and it didn’t take but a smidgen of magic to twist some underwater weeds into what would pass for a strap-less swimsuit. I had a bit of a smirk myself as I stood up in the water that was still waist deep.

“Hi,” I answered and shielded my eyes. Not so much because of the sun glare, but because they are a turquoise color not often found in humans.

The horse snorted as if he was in on the joke and shook his head. Fool, it thought my way.

Your rider or me? I shot back, but it just snorted again. Perhaps it was as much of a jerk as its rider. I studied them both as I stayed in the water. Even though I was pretty sure I would win if I had to fight the man, I wasn’t so sure about the horse.

“Enjoying your swim?” the man on the horse asked.

“It’s a little chilly, but it did the trick.” The horse bucked its head again but didn’t snort this time. It still irritated me. What’s your problem? I projected.

It pulled up its lips, revealing yellow teeth as it grinned at me. But then a puff of wind carried the rider’s scent my way and I immediately lost interest in the cheeky animal.

The rider was no ordinary human, he was a shifter. Wolf, if I interpreted the nuances of his smell correctly. I automatically took a few steps back and sank down to my neck in the water. I’ve never minded regular wolves, but shifters are another matter.

One of my sisters was hunted down and brutally killed by a wolf shifter pack.

The man frowned as I slowly glided back in the water to lengthen the distance between us. He leaned forward in the saddle and I caught the exact moment he figured out I wasn’t an ordinary human either. His nostrils flared and he inhaled deeply, sitting up straighter on the back of the horse as all his muscles tensed.

“What are you?” he asked, his blue eyes intense as they studied me.

“I want no trouble,” I replied, keeping my eyes on him and preparing to shoot down into the depths of the lake if he decided to attack. Hopefully he’d peg me for a water sprite. The Merfolk left the earth realm centuries ago, so there was no reason he’d guess what I truly am. He didn’t look old enough to remember the exodus of my people.

“You’ll have not trouble if you just tell me what you are?”

There was no way I’d give that up. My sisters and I had returned in secret to prepare earth for the return of the Merfolk, but we did not want a repeat of what had happened before my father took all his people off this realm. Back then, other paranormals hunted my kind, forcing them to open portals so their captors could travel between bodies of water here on earth, and to other realms. “Why do you need to know?” I asked the man.

He shook his head. “If you want no trouble with me or mine, tell me who and what you are.”

I did not need this shit. I had enough trouble as it was with my sister’s request of an impossible favor. I have no quarrel with your rider, I told the horse. Just piss off with him, will you?

I sighed. The least this particular member of the equine species could do was prove that horses are as noble as they are rumored. “Be on your way, please,” I told the man instead since his animal was not cooperating.

“I’ll leave as soon as you tell me what you are.” This time the words came out in a growl.

I raised my eyebrows. “Why are you so curious?”

“Why are you so secretive?”

“Don’t turn this around on me. Insisting on such personal details is rude.” The paranormals that can pass for human live in open hiding among the low-ability hominins and most of us recognize each other, but it’s considered very boorish to ask outright what ability someone may have—or if they have any.

The man sighed. “I have my reasons.”

He’s looking for a water creature that has been drowning humans and paranormals, the horse all of a sudden projected my way.

“I’ve never drowned anyone in my life,” I blurted out before I realized how out of the blue that would appear to the rider.

“You can read thoughts? Get out of my head,” he growled.

“No, I—” I wasn’t sure what explanation I could offer, but before I had to think of one, the horse turned one-eighty and trotted off at a fast clip up the trail I’d just come down. I guess the gelding didn’t want to be busted for blabbing about its rider’s business to strangers. Maybe it wasn’t as dumb as I had first thought.

The man’s loud commands and swearing faded away as the horse steadily climbed up the switchbacks of the trail. As soon as they were out of sight, I rushed out of the water and quickly dressed. I shouldered my pack and almost ran to the trail. If I was lucky, I’d be well on my way to my truck before the man regained control of the horse and turned around.

Click for more spotlights on the other great titles in this series!

Ganesh because he is the remover of obstacles, the patron of arts and sciences, and the deva of intellect and wisdom. But mostly because he has an elephant head and I really like elephants.

Totally Ursula. She’s devious. The shark was just being a shark. ☺

Blue Whale, because it is the largest mammal ever!

Dori. Our memories work the same.

Madison. (Did I just date myself?) 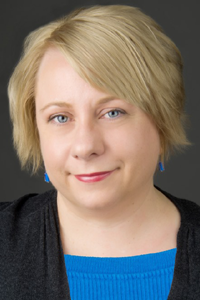 Asa Maria Bradley grew up in Sweden surrounded by archaeology and history steeped in Norse mythology, which inspired her modern-day Viking paranormal romance series. She also writes urban fantasy with kick-ass heroines. Her books have received many accolades including a double RITA nomination, an RT Reviewers’ Choice Award nomination, a Holt Medallion win, and a Booksellers’ Best win. When she’s not writing or working her day job as physics professor, Asa spends way too much time online. You can find links to all her social media and connect with her at www.AsaMariaBradley.com.