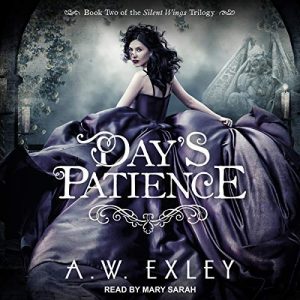 Day’s Patience is the fantastic sophomore story in the Silent Wings series. Ms. Exley has created a fascinating world set in historic England, filled with unique and fantastical creatures that live among the humans. The series is a wonderful combination of slow-burning romance and historical fantasy.

The book opens in the past, with Lady Letitia Seton, aka Lettie, recalling the events from decades ago when her brother was brutally murdered and the start of her madness brought on by Ava. Lettie’s story begins after shortly after the conclusion of the previous book, Dawn’s Promise, with Ava dead and Lettie beginning to heal. Day’s Patience builds upon the events of the first book, and I highly recommend the series be read in order.

With Lettie healing, she feels the need to leave the home she was virtually imprisoned in for 40 years. She offers to head to the neighboring county to find out more about Dawn’s parents and how they died. Although she has little need for her physician, Doctor Grayson Day, he offers to go along to protect her, with Nurse Hatton as chaperone. I enjoyed how this trio interacted and worked together, both in the doctor’s office, and during the investigations into Dawn’s past.

While in County Durham, Lettie flirts with the enemy of her family (and species) in order to avenge her brother’s death. This awakens all sorts of feelings in Lettie, things that had died when Ava invaded her mind. She is swept up in her attraction to the enemy, leaving her judgement impaired, which confuses her heart and soul, especially since she believes she’s lost her true mate. But when she realizes it is Grayson she genuinely cares for, she worries he’ll never see her as more than a sister-figure. Lettie’s emotions are powerful, keeping my heart involved from beginning to end.

Narration: Day’s Patience is shared (with one minor exception) via the third person POV of Lettie. Ms. Sarah provides a naturally soft and gentle narration. Her slight British accent adds to the setting and fantastical nature of the story. The narrator alters her voice for each character, with males a bit deeper but still soft spoken. There is one chapter from Nurse Hatton’s POV. Overall, the soft, lilting, wispy nature of the narrator adds to the whimsical nature of the story. It’s comforting, but emotional when called for.

In the end, I am absolutely enjoying the audiobook versions of the Silent Wings series. The slow-burning romances and highly-detailed stories are fascinating, and I cannot wait to follow the Seton clan as they work to uncover the mysteries surrounding the death of Dawn’s parents.

After a long sickness, Lady Letitia Seton is finally free. But the last fractures in her mind won’t heal until she confronts old wounds. Intent on finding answers about a murderous conspiracy against her family and to complete her recovery, she travels to County Durham.

Dr Grayson Day devoted his life to healing the princess in the tower. Not wanting her to journey alone into the unknown, he volunteers to accompany Lettie. But he is cast in the role of brother. Now he can only watch as Lettie becomes entwined with an enticing sylph—for what could a short-lived country doctor offer the beautiful Elemental?

But Lettie plays a dangerous game and she struggles to understand her attraction to her enemy, even as she uncovers old secrets. Can she discover the truth, before it is too late for her heart and her family?