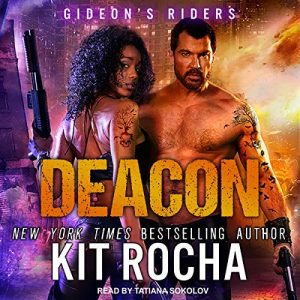 Building upon the world and characters from the first book (and original series), Deacon brings us more details about the lives of Gideon’s Riders and life in Sector One. Most of the story is shared between Deacon, the leader of the Riders, and Ana, the first female Rider. Both live with incredible self-discipline, flamed by their internal need to prove themselves worthy of the title of Rider. For Deacon, he’s making up for the mistakes of his youth and life before becoming a rider, whereas Ana feels the need to be perfect so that future females will have the opportunity to become Riders.

While Deacon brings listeners action-filled excitement and a passionate romance, it’s the underlying messages and character growth that impressed me most and kept me invested in the outcome. Twenty years ago, Deacon was an orphan taken in by mercenaries. He was sent to Sector One to kill Gideon, but instead, Deacon joined Gideon’s Riders. After a long silence, the Suicide Kings are once again active and gunning for Deacon and the rest of the Riders. Over the course of the story, Deacon goes from shame over his past (which none of the other Riders know about) and a willingness to sacrifice himself to owning his past with confidence, strength, and understanding. It’s through Ana’s compassion and friendship that Deacon becomes the man Gideon knew he could be when he first recruited Deacon all those years ago.

Similarly, Ana transforms throughout the course of the tale. She knows that dozens of girls look to her with admiration, so Ana feels she cannot make a mistake or those girls will never have the chance to become a Rider. Even though she was raised and trained hard to become a Rider, she feels that people will only remember her faults. This includes having an affair with Deacon. She assumes people will think she only got the job of Rider because she slept her way to the job. It’s only after she lets Deacon in and allows herself to embrace her feelings that she recognizes the tiny box she’s made for herself isn’t big enough to fit any future female Riders. She learns to love herself and trust others to believe in her for her, not her image.

Narration: the book is shared via 3rd person POVs; primarily Deacon and Ana, with a few other supporting characters. Regardless of which POV is narrating the chapter, Ms. Sokolov uses a neutral feminine voice, and it is easy to follow and pleasing to listen to. Ms. Sokolov alters the voices for each character during dialogue, with each voice mildly distinctive from the others. Her male voices are appropriately deeper and not too feminine; however, sometimes the males sound similar. The female voices are similar to the narrator, but distinct enough to separate out. The only time I had difficulty discerning who was speaking was during times of heavy dialogue between two characters of the same gender.

In the end, I enjoyed Deacon and Ana’s story for the action and romance, but even more so because of the development of the primary characters and learning more about Sector One in general. And with the teasers indicating the next romantic pairing, I’m all-the-more excited to listen to the third book in the Gideon’s Riders series.

Ana has trained most of her life to achieve one goal: to prove that anything men can do, she can do better. Now she’s Sector One’s first female Rider, and being the best is the only way to ensure she won’t be its last. Distractions aren’t allowed–especially not her painful attraction to the reserved but demanding leader whose stern, grumpy demeanor has already gotten into her head.

Deacon has spent the last twenty years trying to atone for his past, but the blood he spilled as a mercenary and assassin will never wash away entirely. If his riders knew the extent of his sins, he’d lose their trust and respect. It’s easier to keep them all at arm’s length, especially Ana. But his newest recruit’s stubbornness is starting to crack his defenses.

And their sparring matches are driving him wild.

The passion sparking between them can’t be denied, but neither can the vengeance barreling toward Deacon. When his old squad comes back to punish him for his betrayal, Ana and the Riders are squarely in the line of fire. The only way to save his people may be to make the ultimate sacrifice.

But first, he has to convince Ana not to follow him straight into hell.