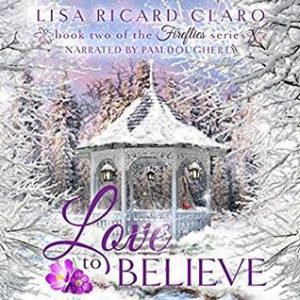 Love to Believe is the second small-town romance in Lisa Ricard Claro’s Fireflies series. While an enjoyable standalone, the main characters met in the first book, when we got to know both the Walker and Kincaid families. Sean and Rebecca became friends, the kind that joke and toss around innuendos. But when things go south in Rebecca’s dating life, they propose a no-strings-attached arrangement to satisfy their itches. Of course, the more time they spend together, the more they realize how perfect they are together and fall in love. Unfortunately, secrets and misunderstandings get in the way of happiness.

I simply adore the Fireflies series. The small-town setting is quaint and comforting. The author describes the locale, with its businesses and denizens, in enough detail and care to make it feel real. And while I love the setting, the characters are the heart of the story. In Love to Believe, the author layers in additional attributes and backstories to further build upon the foundation created in her first story.

Rebecca is doing the job of two people at her dad’s construction business yet he continues to push to keep her behind a desk. She’s frustrated and learns to confide in Sean, bringing the pair closer. Sean opens up and shares things about his past he hasn’t told anyone else. The pair become best friends over time and don’t realize they’ve fallen in love until it’s too late. I love that we are privy to their feelings and witness the organic progression of their relationship. However, when misunderstandings tear the couple apart, it’s the lack of communication that does the most damage. Normally I get frustrated by that, but the story is written with so much detail and emotion that the extra length it takes for them to clear the air works for me. And as in the first book, Sean’s deceased brother Jack steps in with some guidance to help bring the couple together. I am so glad the author included that aspect of the storyline again.

Narration: as with the first book in the series, Love to Believe is wonderfully narrated by Pam Dougherty. The story is shared in the third person narrative of Rebecca and Sean. Ms. Dougherty uses the same feminine voice for narrator throughout the book, changing the tone and cadence for dialogue. Her southern accent fits the Georgian characters. The male voices are fairly light and feminine, however deeper than the female and narrator. Even though there isn’t a huge difference in each character’s sound, I can tell who is who. It’s more the way the narrator talks than her actual tone. Each character has its own cadence and rhythm, making it unique.

Love to Believe is an all-around feel good book. I adore the characters, and the narration is perfect. I love the big family atmosphere and how much everyone cares about the other. The author provides lots of little details that make the setting and characters so real. In the end, the romance made my heart happy and that’s saying a lot.

A woman in a man’s world…

CPA Rebecca Walker wields a hammer and saw with skill, but it’s like fighting tooth and nail to prove to her chauvinistic father that she’s capable of managing the family construction business. Romance is a luxury Rebecca can’t afford.

A man with secrets…

Thanks to his past, romance isn’t in Sean Kinkaid’s future, so when Rebecca proposes ‘friends with benefits,’ Sean agrees. It’s the perfect scenario until love sneaks in—and Sean’s secrets tear them apart.

But Rebecca has a secret too, one she fears Sean will never accept. It will take intervention from an unlikely source to convince these two lovers they have the one thing neither of them ever expected to find…a love to believe.