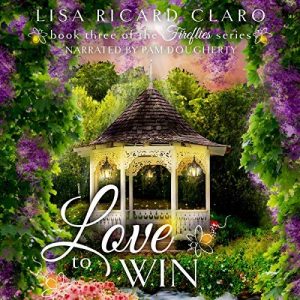 Love to Win is the third (and final… for now!) feel-good romance in the Fireflies series. As I stated in my review of the second book, Love to Believe, these titles are each standalone romances; however the character development and setting began with the first title and continues to grow with each subsequent book. This time around, the story shifts to Jack’s sister Brenna and family friend Dante (the Neanderthal). Jack continues to work his match-making magic from the beyond, bringing together two people who, while not perfect, are perfect for one another.

Brenna and Dante are both similar and have had a competitive relationship since they first met. Both are driven – owning and operating their own restaurants – and both LOVE TO WIN, although I feel like that means more to Brenna than it does to Dante. Whereas Dante doesn’t understand why Brenna seems to dislike him so much; he treats any competition as good-natured fun. He is extremely successful, and it drives Brenna crazy. It isn’t until she learns more about Dante’s childhood and life that she starts to rethink her grudges. However, that doesn’t keep Brenna from doing anything to win. She knows its a weakness and that it may drive her to lose what is most important in her life, but she can’t seem to stop herself.

One thing that really stands out for me in Love to Win is how the author maintains a lovely, feel-good romance while introducing serious hurdles and conflicts into the story. But rather than handle them with high drama, she lets the issues play out while the characters continue to be kind and mature. What could be horrible side stories in any other book, were ones of many layers that enhanced this story rather than turned it into a circus.

Narration: as with the other books in the series, Love to Win is wonderfully narrated by Pam Dougherty. Her calm voice and southern accent suits the small-town setting and easy nature of the tale. The story is shared in the third person narrative of Brenna and Dante. Ms. Dougherty uses the same feminine voice for narrator throughout the book, changing the tone and cadence for dialogue. The male voices are slightly deeper than the female characters and narrator. Even though there isn’t a huge difference in each character’s sound, I can tell who is who. It’s more the way the narrator talks than her actual tone. Each character has its own cadence and rhythm, making it unique.

Love to Win is another feel-good romance filled with a few tears and many chuckles. Brenna and Dante are meant to be, but have a bumpy road due to their competitive streak and stubborn attitudes. But when it counts, each pushes the other to realize what they have is once-in-a-lifetime and not something to toss aside.

She hates to lose…

Competitive barista Brenna Kinkaid loves a challenge, and she’ll do whatever it takes to win, especially when it comes to her nemesis, Dante Caravicci. But when forced to team up to save their best friends’ wedding, Brenna recognizes that Dante might just be her ultimate win.

He plays to win…

Restaurateur Dante Caravicci won’t quit anything until he can claim success. He’s bided his time, but he’s used to taking big risks and surviving, so he figures he’s got nothing to lose by playing for Brenna.

These two fall fast, and it looks like a win-win—until a competition pits them head-to-head and one of them goes way too far. A nudge from an improbable source may be the only way these two competitors will ever admit that the only way to win is to lose their hearts.