Audiobook review: Once Upon a Hallow’s Eve 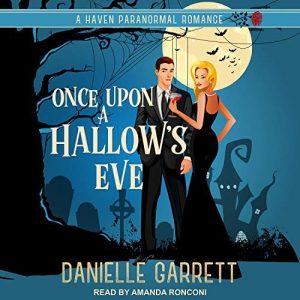 After throughly enjoying Ms. Garrett’s Beechwood Harbor Magic Mysteries, I was excited to discover the new spinoff Haven Paranormal Romance series. The author’s storytelling style translates nicely into the paranormal romance genre; keeping a quite a lot of the exciting mystery aspect, but adding in a dash of sweet romance.

Once Upon a Hallow’s Eve centers on vampiress Lacey Vaughn, one of the more prominent supporting characters from the Beechwood Harbor series. Lacey comes from a powerful vampire family, and her father has summoned her home after a five-year exile; it is time for Lacey to take her place in court, marry, and produce an heir. Lacey’s father is a horrible, selfish man, who will not only choose Lacey’s husband for her, but will do so via a medieval tournament of blood with eight eligible vampires competing for Lacey’s hand. Due to circumstances, including the murder of one of the contestants, Lacey is paired with suitor Mathias for her own protection. After a rocky start, the pair find a lot of common ground (including power-hungry parents) and develop genuine feelings for one another.

Even though the story is a spinoff, one need not read the original series to enjoy Once Upon a Hallow’s Eve; however, it may help with some of the world building and background. The author gives listeners a whole new set of rules as the locale moves from the human world and multi-species characters of Beechwood Harbor, to an exclusively vampire setting. Ms. Garrett builds this new setting quickly as we see things via Lacey’s point-of-view. I was impressed with the amount of details worked into the dialogue or Lacey’s observations. While there were several new characters to learn, I found the story interesting and exciting, which smoothed the learning curve. What I didn’t expect, and was pleasantly surprised with, is the complexity of the murder mystery and the shocking twists.

Narration: The story is told in the first person, past tense narrative of Lacey. Since the narrator is also the main character, her voice is the predominant one we hear. It is well-suited, with a bit of sadness in Lacey, but energetic and excited as she unravels the mysteries surround her father’s court. Ms. Ronconi appropriately alters the dialogue for other characters and does a good job differentiating masculine or feminine, older or younger. Sometimes the voices are a little too similar when there are three or more people speaking, especially two males, but not so bad that I get completely confused or lost.

In the end, I very much enjoyed the start of this new paranormal romance series. Ms. Garrett continues to share well-written stories while Ms. Ronconi provides delightful narration.

Going home is the last thing that Lacey Vaughn wants to do. In fact, she’s been avoiding it for the better part of past five years. Her self-imposed exile comes to an abrupt end when she receives a summons from the Lord of House Vaughn. After all, he’s not just the Barron of the East Coast, he’s her father. But when his intentions are revealed, Lacey is forced to reconsider her sworn obedience to both House Vaughn and her own family.

Mathias Hartford has the world on a string. At least, his little corner of it. He stays out of the way and in return, flies under the radar of the rest of his power-hungry family.

The last thing either of them are looking for is to fall in love. So, when a secret, backdoor peace treaty is presented, Lacey and Mathias are forced to choose between an arranged marriage or the war of their families. Will they put aside their difference for the good of their own? Or rebel and bring about irreparable consequences on their own houses?