Today we have a special Audiobook Spotlight: 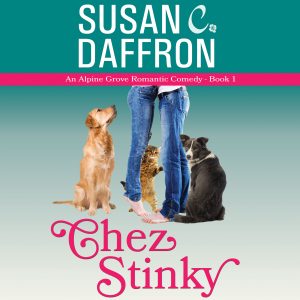 Kat Stevens is a slightly insecure, mostly bored technical writer who likes her cat a lot more than her boss. She hasn’t laid eyes on her great aunt Abigail since she was eight, so she’s stumped when she inherits Abgail’s house in the small hamlet of Alpine Grove.

Kat’s uncomplicated life gets decidedly less so when she discovers the inheritance comes with some hairy conditions: four dogs and five cats that her aunt wanted her to love as her own. Of course, the house smells like a barn–with a touch of antique skunk–and, naturally, has serious roof issues. And that’s before the three-legged cat gets stuck in the wall and the shower goes kablooey.

When Kat meets Joel, an unemployed techie type with no love lost for his sister, Kat looks past his obvious flaws, given his timely and desirable skill set: a talent for fixing things (and his own tools).

Despite out-of-control dogs, cat fights, dust dinosaurs, massive spiders and an old grizzled hippie passed out in the yard, Kat discovers the tranquility of the forests of Alpine Grove starting to seep into her soul.

And why she can’t she stop thinking about Joel?

Listen to the Book:

Susan Daffron is the author of the Jennings & O’Shea mysteries and the Alpine Grove Romantic Comedies, a series of novels that feature residents of the small town of Alpine Grove and their various quirky dogs and cats. She is also an award-winning author of many nonfiction books, including several about pets and animal rescue.

An award-winning professional actress, Pam Dougherty has spent over 40 years on stage, screen and in the studio. http://pamdougherty.com

Katherine Stevens yawned at her monitor. The document on the screen blurred as she squeezed her eyes shut. She was supposed to be writing a technical white paper, but it was painfully dull. What her colleagues in the other cubicles didn’t know was that instead of writing, she was thinking about the old black-and-white TV show “This is Your Life” with Ralph Edwards. The show was from the 50s and she’d only seen reruns a couple of times. The looks of horror the guests of honor inevitably would get when Ralph appeared and outlined all the most intimate details of their life in front of a live audience were definitely memorable, though.

If they showcased my life, that show would have been canceled after one episode due to terminal boredom. When Kat was a kid, she wanted to be Jo from Little Women, writing fabulous tales of action and adventure from her garret. Or a princess, since everyone knows princesses get to wear fabulous floaty clothes, live in a castle and ride ponies. Of course, you probably also had to marry your ugly third cousin, so as a career choice it did have some limitations.

She looked at the clock on the wall. Only two more hours to go.

No, Katherine Stevens wasn’t a princess. Far from it. She was a technical writer and tales of action and adventure were few. Her acts of daring sometimes included proofreading parts lists to make sure they had the right number of resistors and capacitors. At this point in the mid-1990s, the biggest high-tech innovation of the year was the invention of the Wonder Bra. For all the talk of progress, technology had not moved much beyond asset-boosting underwear.

The company’s lead salesperson, Chris Granger, walked up to Kat’s desk, breaking her reverie. “Hey Kat, are you being followed by a moon shadow?”

She mentally rolled her eyes. Yes, her nickname was Kat. Mom had a fondness for 70s folk singers and a cute sense of humor. Chris never tired of the joke. “No Chris, I’m not. No moon shadows for me. What do you want?”

“I need you to edit my proposal. And I need it by Monday. John Horne is coming to talk to us. He is a super, super important guy, so the proposal needs to be really, really good!” Chris fluttered his long lashes for emphasis, which along with his habit of repeating adverbs was an affectation Kat found annoying. To be fair, he did have dazzling teal green eyes and dark good looks, which probably helped his sales. Like most handsome men in California, he’d bought some hair gel, slicked back his hair and done a stint in Los Angeles as an actor/waiter. When that career choice ended in destitution, he opted to go into technology sales instead.

“Chris, you do realize that the proposal is 400 pages long, right? You were supposed to give it to me last month,” Kat said.

“I know, but I was so busy. You can do it over the weekend, right? It’s not like you have anything to do anyway. I’m going to be flying out to Aspen with Mandi, so I’m not really going to be available to talk about it with you. You’ll figure it out.”

“Okay Chris, but I need to talk to Mark about this.”

“Whatever. I’m headed to the airport now. See ya!” Chris turned around and smoothed back his dark hair with his palms. As he walked off down the corridor, he patted the tops of the cubicle walls.

Talking to her boss Mark would be an exercise in futility. Most of the time when Kat ventured to his office to talk to him, he seemed a little surprised she worked there, even though she’d been with the company for more than a year. His unique ability to make her feel invisible grated, particularly since he had a habit of calling her at home on the weekends to discuss trivial things like comma placement. But given his offensive comments about other women in the office, it could be worse. Fortunately, she wasn’t his type. With her petite frame and wavy dark hair, Kat didn’t have the Malibu Barbie looks Mark tended to find intriguing. Kat often reminded herself that you don’t have to like the person who signs your paycheck.

Since Mark tended to disappear early on Fridays, Kat needed to get the conversation with him over with. She looked at the posters she had hanging on her cubicle walls. Half Dome in Yosemite, Glacier National Park, and Jackson Hole in Wyoming. Covering up the Steelcase gray partitions with beautiful scenery did help sometimes. But today, the images mostly just made her want to head to the airport, step on a plane, and get away. She sighed, got up from her chair and went down the hallway to Mark’s office.

Mark Spencer sat behind his large mahogany desk looking down at his fingernails. He had his feet up on the corner of the desk. His amphibious utility sandals had some mud caked on the soles. Maybe he’d gone out for a run with his jock buddies at lunch. Kat knocked on the partially open office door. “Hi, Mark. Can I talk to you for a second?”

“Hey Kat, I’m pretty busy, but I’ve got a couple minutes before I head out.”

“I just wanted to check with you about Chris’s proposal. He was supposed to give it to me last month, but he just handed it off to me and says he needs it edited by Monday. That means I’m going to have to work on it over the weekend.”

“Hmm, that’s interesting,” he said looking up and pointing his nail clippers at Kat. “I’ve been thinking about gingko lately. It’s an herb, you know. Do you think it makes me smarter? I’ve been taking it and I think I’m getting smarter. What do you think?”

“Well, Mark, I’m not sure. You seem the same to me. If you start getting dumber, should I let you know? So, about that proposal…”

“Oh yeah, work over the weekend, but you’re on salary, so there’s no such thing as overtime.”

With a flourish, Mark flipped his sun-bleached auburn hair and gave a sidelong glance at the mirror on the wall. He pulled a strap tighter on his Teva sandal and then put both feet on the floor with a stomp. “Wow, I really gotta go. Candi is waiting at the Beach House. We’re celebrating my new BMW. Did I tell you I got a rag top? It’s just so cool.”

Kat stared at him. “Okay, ‘bye.” It was interesting that most of the men in the office had a preference for tall bleached-blonde women whose names ended in “i.” Maybe the ladies signed their names with cute little hearts, too.

Kat returned to her cubicle and stared up at Half Dome. The John Muir quote suggested that she go climb a mountain. Maybe that wasn’t such a bad idea.