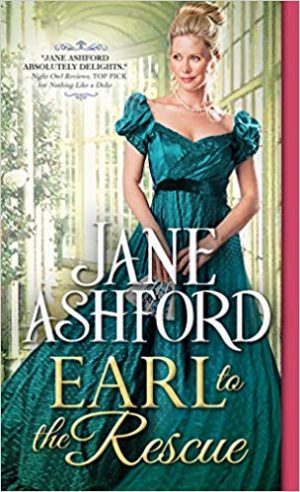 I wanted to like Earl to the Rescue. The storyline had a ton of potential, but it just never lived up to it. The characters, when they weren’t bland and predictable, were annoying; for example the heroine, Gwendeline constantly refers to herself as stupid. I understand that she has not been raised with the education typical to a lady of means, but it seems highly unlikely that she would regularly refer to herself as dumb. Add to that the myriad of secrets being kept by those that are tending to Gwendeline, and the story ends up feeling convoluted. It was like Ms. Ashford was trying to make up for lack of a love story by throwing overly complicated issues, like the truth, in the way of the characters.

The secondary characters are okay; the mother adds a bit of unexpected color and he best friend is mildly engaging but they were really the highlight of the whole novel for me. Even the bad guy was boringly predictable.

This novel is presented as a love story but there is no chemistry or romance. No evolution or real connection that is ever shown. It is just randomly declared by Gwendeline, and it is never shown how she got there. It reminded me of the “love story” in The movie Bright Eyes with Shirley Temple when the older sister magically falls in love with their benefactor and you’re left wondering “wait?! What?!? how!?!”

Overall I’m giving this novel a C, which feels generous given the lack of character development and storyline, but every author has an off novel and I’m hoping that was simply the case for Ms. Ashford and The Earl to the Rescue.

Who needs a knight in shining armor when there’s an earl at your side…?

Gwendeline Gregory doesn’t know what to think when she encounters the dashing Alex St. Audley, Earl of Merryn. She’s in over her head in London Society, trying to fend off a scoundrel who will stop at nothing to ruin her. On the brink of a devastating scandal, the earl arrives just when she needs him most. But are his motivations trustworthy? And can he avert ruin for both of them?