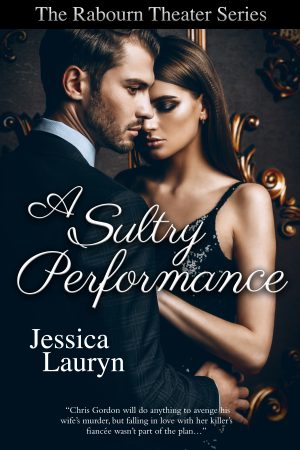 Chris tucked a disheveled wave behind her ear. “You don’t look fine. You’re trembling, and you look as though you’ve been crying.”

Victoria did her best to hold it together, like she always did. But seeing the compassion in Chris’s eyes, compassion that ran deeper than anything she had ever been on the receiving end of, the emotions welled inside of her. As the tears spilled down her face Chris took her into his arms. His strength surrounded her. He brought her inside of it, brushing one strong hand up and down her back.

“Victoria,” he whispered, “why are you marrying that man?”

Victoria tried, but couldn’t think of a single reason why she was. For years, she’d been telling herself that she was humoring Oakley, biding her time with him until she could approach him from a position of power. But the more time passed, the more she questioned whether that day would ever come. The night Oakley had asked her to marry him, there hadn’t been any question in her mind that she was going to say yes. Such had been the way of their disgusting farce of a relationship. She presented a hard-edged front to the world, but when it came to the man who’d been manipulating her for half her life, it was as though she had no power at all, as though she might just as well be nothing more than a mouse.

Avoiding Chris’s eyes, because she couldn’t possibly hide the truth from him if they were looking at each other head-on, Victoria simply said, “I love him.”

Chris’s arms stiffened and Victoria froze in turn, barely breathing as he took her by the shoulders, saying, “Victoria, that man just embarrassed you in front of two hundred people. He berated you, he manhandled you and he exploits you every night of your life. How could you possibly love a man like that?”

Victoria gnawed her lip, completely at a loss for words. She had no defense for the man in question and by aligning herself with him she was sacrificing more of her identity every day. Not that the life she’d led had made her crazy about relationships in general, but she wasn’t even opening herself to the possibility of another man’s companionship, to his soothing words and soft touch. Was it so wrong to want these things, so impossible to have them? Bringing Chris into the middle of her relationship with Oakley was liable to prove dangerous for both of them. But Chris was strong. He had to be, to have survived the loss he had.

Cautioning herself not to allow her thoughts to get away from her, knowing that Oakley would probably kill a man he perceived to be a serious enough threat to him, Victoria lifted her chin. “I know what it looks like, but I couldn’t count the things Oakley has done for me over the years. He’s protected me, and I sleep soundly at night knowing that no one is going to hurt me. He makes me feel safe.”

She realized right away that she shouldn’t have put things in those terms because the twinkle in Chris’s eyes told her exactly what his reply was going to be. She ought to run. He was giving her a chance to do just that, but her legs refused to stand. Instead, they eased sideways, leading the way like the smokestack on a train as her body leaned helplessly into that of the man sitting beside her.

“Tell me, Victoria—” Chris looked into her eyes, “does Oakley Sutherland make you feel like this?”

Don’t miss AN AMOROUS DANCE, Book 2 of the Rabourn Theater series, out now in e-book and in paperback! http://jessicalauryn.com/book/an-amorous-dance/

Everything Chris Gordon will do anything to avenge his wife’s murder, but falling in love with her killer’s fiancée wasn’t part of the plan…

Chris Gordon, stage manager at Rabourn Theater, suspects his late wife’s hit-and-run was never an accident. He believes the man she was having an affair with, Oakley Sutherland, was responsible and he vows to get Evelyn justice, igniting a plot to ensnare Oakley, working through Oakley’s fiancée, Victoria.

A well-known exotic dancer by night, Victoria Morrow has been fighting to make a better life for herself, and she won’t be taken advantage of. But when the most handsome man at Rabourn Theater takes an interest in her, she finds herself spiraling down a path she never expected to. Can Victoria resist Chris’s charms? Or will both of them fall prey to the danger that lurks in the wings?