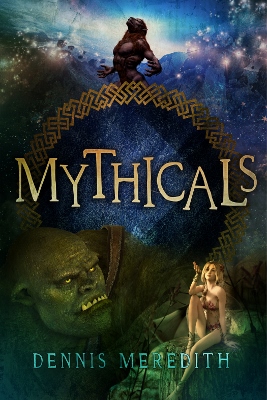 “TURN OFF THE LIGHTS, YOU CURSED ELVES!” roared Mike the ogre into the radio. He scratched his bulbous belly and glared up at the gleaming orb sailing silently across the black night sky against the backdrop of stars. From his throat rumbled an angry stentorian growl. “Stupid elves,” he muttered. “They mastered wormhole travel, built a technology equal to any, and they cannot remember to turn off the lights!”

“Other species forget, too, y’know,” said Deborah— now A’eiio because the fairy no longer wore her flesh-suit disguise. She stood expectantly beside the ogre in the darkness.

“Yes, but the elves are the worst,” muttered the ogre. “One switch! All they have to remember is to turn off one cursed switch on the other side of the wormhole to make it dark . . . so it won’t look like a light in the sky. And they cannot remember. Or more likely, they do it on purpose to frighten this planet’s poor creatures.”

The light grew larger and larger. In only seconds more it would grow to outshine all the stars, becoming what the planet’s indigenous species would call an “unidentified aerial phenomenon.”

Now the wormhole was a sphere of total blackness that descended smoothly toward them in the wooded valley in the fairies’ farm, far beyond any town. The elves, as forgetful as they were about lights, were expert wormhole pilots.

Now the elves switched on the lights, and the wormhole became a luminous sphere casting its light on the desert below. The glow revealed a large cadre of fairies, trolls, werewolves, gnomes, and elves peering upward as the hole grew larger. It halted to hover above them, a subtly hued aurora of red, green, yellow, and blue shimmering about its surface. A faint hiss and crackling enveloped the crowd, telling of air molecules tortured as they impacted with the interdimensional portal. And the sharp tang of ozone told of the cosmic energy being pumped into the atmosphere.

A small knot of vampires lurked well outside the illuminated circle, averse to bright lights. They would wait until the elves obligingly dimmed the lights to conduct their commerce with the various races on the other side of the visiting wormhole.

Mike the ogre continued to manage the process, hitching up the leather loincloth that reached from his belly down to the tree-trunk-thick legs.

“Hold, please,” he said, his voice still tinged with sarcastic impatience. He spoke into the radio once more, but this time to the Allies guarding the gates to the sprawling private farm that was their landing port. To any wayfarers, they would appear to be mere farm hands tending to evening chores at the gates of the farm. “Any interest from the locals?” he asked.

“No traffic,” came the answer. “No vehicles. You’re all right to proceed.” “Form the aperture,” instructed the ogre, and one side of the wormhole flattened, and a ramp extended to the ground from the shimmering globe. The ogre stalked up the ramp and poked his large head through. “Begin transport,” he commanded.

He withdrew, to be followed by three elves, their spindly legs and arms fighting the planet’s gravity, which was nearly twice that of their home planet. Their beady eyes also strained to make out the area, given that the light was far lower than what they were used to. Each of them donned light-amplifying goggles that gave their eyes a large bulbous look.

The lead elf emitted a litany of scritchy-squeaks at the ogre— a language that few could understand. Except pixies. From behind the ogre came the far more pleasant tones of Sam the pixie. “We are terribly sorry,” came the translation. “We will take more care with the illumination.” “Let’s just begin the unloading,” grumped the ogre. “We haven’t got all night.”

“Well, actually we have,” came a lilting voice from inside the hole, and a fairy Warden stepped out, wearing the large, gold chain, with the Control medallion that was the sign of his office. It was covered with glowing colored buttons with which Wardens communicated and managed the exiles who were their responsibility.

The Warden smiled tolerantly. He was used to such stammering. After all, when he or another Warden wielded the Control medallion, they literally held the fate of all the planet’s exiled Mythicals in their hands.

“Please carry on,” said the Warden. “I will conduct my business.” The ogre, the elves, and the other Mythicals began to pass the cylindrical cargo containers out of the wormhole, distributing them as required.

For A’eiio, the important containers held new flesh-suits for her and E’iouy, and she hauled them to her waiting SUV. She also pocketed the small test kit, smiling to herself.

But the smile faded with the acute awareness that next would come a meeting with the Warden. She passed by a chilling reminder of what punishment that meeting might bring. As she walked to meet the Warden in a secluded clearing nearby, two barrel-chested werewolves were sliding a coffin-like case through the hole, to be trans-shipped to a penal colony on some barren planet on the other side of the wormhole.

The case held the unconscious body of one of their kind, another exile, who had sought revenge on a citizen of this planet by revealing his horrific snarling face to the victim. The werewolf Warden had triggered the exile’s coma chip, rendering him unconscious until he would wake up in a cell, where he would stay for decades to come. The errant werewolf’s relatively short exile to this planet for illegal financial dealings had now been extended and made more onerous by his near-violent behavior.

Drunken journalist Jack March can’t believe his bleary eyes when he stumbles onto a winged fairy! She vaults away into the night sky, and his unbelievable—and unbelieved—encounter leads to a stunning revelation that all the creatures of myth and legend are real!

Fairies, pixies, trolls, werewolves, ogres, vampires, angels, elves, bigfoot—all are alien exiles to the planet. For their crimes, these “mythicals” are serving out banishment disguised in flesh-suits enabling them to live among the planet’s natives.

Jack reveals their secret to the world, along with a horrendous discovery: they have decided that the native “terminal species” must be eradicated before it ruins its home planet’s ecology.

In this riveting scifi/fairy tale, Jack joins with sympathetic fairies, pixies, and ogres to attempt to save the planet from the mythicals, as well as the mysterious alien cabal known as the Pilgrims.