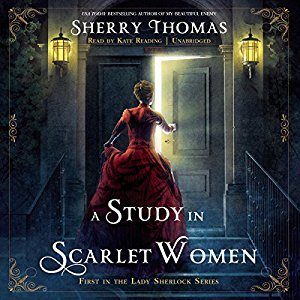 Charlotte Holmes is an odd duck, especially among her peers of the time. Knowing she’d never want to marry, she made a deal with her father that she could go to school and become a headmistress at a boarding school. So when her father backs out of the bargain, Charlotte ruins herself and runs from home. Striking up a friendship with a former actress, Charlotte begins her secret life as detective Sherlock Holmes. When her sister and father appear to be the subject of a murder investigation, Sherlock lends aid to the police, uncovering some nasty secrets along the way.

A Study in Scarlet Women is a wonderful historical mystery that takes its time, weaving a complex plot and bringing it all together for a shocking climax. The book opening is a bit confusing, as the reader is tossed into the middle of events without the necessary background to understand what is happening. While I found myself completely confused for the first couple chapters, as the book progressed, it all made sense. The story is shared from multiple point-of-views, which I did not expect – and this lent to my confusion. Once the story shared all the background and history of Charlotte and her sisters, and the main mysteries began to take shape, I became engrossed in the tale. The story shares Charlotte’s struggles to make it on her own, as well as a pair of mysteries that have stumped Sherlock.

Overall, I found A Study in Scarlet Women to be a wonderful story. The mysteries are complex, with multiple layers, but not to the point of ridiculousness. The story is smart and Charlotte is cunning. The author does a great job of explaining Charlotte and her “defectiveness” on relating to other humans, and I love Charlotte more because of the affections of those who know and accept her. While the mystery is engrossing, the slow development of the characters is equally gripping. The author hooks the listener, but leaves much unanswered, which will keep me coming back for more.

Narration: The story is shared from multiple third-person POVs, both male and female. Ms. Reading has a fairly deep, feminine, accented voice. The dialogue is altered based on who is speaking – enough to identify that it is more than one person speaking, and most characters are assigned a specific voice. However, there are many characters and I can’t say for certain each has a unique voice. Ms. Reading’s male voices are fairly deep and genuine. The story is narrated with an English accent – adjusted to fit the social class of the speaker. There is an overall narrator with a feminine voice, but the story is heavy on dialogue, so we don’t hear it very often.

In the end, I highly enjoyed my first foray into the world of Lady Sherlock, and I look forward to finding out what Charlotte does next!

With her inquisitive mind, Charlotte Holmes has never felt comfortable with the demureness expected of the fairer sex in upper class society. But even she never thought that she would become a social pariah, an outcast fending for herself on the mean streets of London.

When the city is struck by a trio of unexpected deaths and suspicion falls on her sister and her father, Charlotte is desperate to find the true culprits and clear the family name. She’ll have help from friends new and old—a kind-hearted widow, a police inspector, and a man who has long loved her.

But in the end, it will be up to Charlotte, under the assumed name Sherlock Holmes, to challenge society’s expectations and match wits against an unseen mastermind.