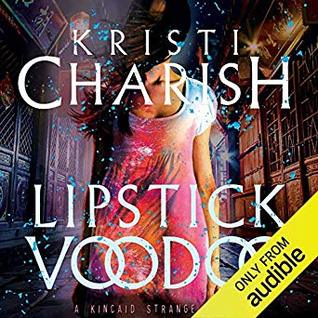 Lipstick Voodoo, is the second book in the Kincaid Strange series. The first book, The Voodoo Killings was released in 2016 so I had to do a quick relisten to help me get back into the world. I enjoyed it the second time around just as much as I did the first time (you can see my review on Goodreads).

Lipstick Voodoo takes place about two weeks after the events in The Voodoo Killings. This time around Kincaid is working a lipstick séance (a term coined by voodoo practitioners referring to seances where no really wants to hear what the ghost/ zombie has to say. In this case, it’s a family fighting over a will of a cheating husband. Kincaid is working gigs like this because she lost her job with the Seattle police department, thanks to the new chief who doesn’t believe in the paranormal.

Aaron, Kincaid’s ex-boyfriend, is a cop and works under the chief. He has tried to help her out as much as he is willing to without losing his own job. He contacts her in hopes she will help him with a cold case from the 1990s. This case happens to have a connection to Kincaid’s ghost buddy, Nate.

Nate was a 90’s grunge rocker who died around ‘95-’96. He also knows the victim in the cold case, but he and Kincaid already have their hands full with a problem from the end of The Voodoo Killings (won’t say more so as not to spoil you). This issue, plus the cold case, is the major storyline for Lipstick Voodoo.

Kristi Charish has done a great job building a world surrounded by paranormal creatures like ghouls, ghosts, zombies, Jinn, poltergeist, and wraiths. They are all part of the Otherside. The mystical world that allows people to become these creatures after they die. While the rules are not completely clear, yet, we get more info in the second installment, and it seems more will be forthcoming with each book in the Kincaid Strange series.

Like similar series such as Charley Davidson and White Trash Zombie series, the Kincaid Strange series deals with mystery cases in each book with an overall story arc coming from book to book.  I wouldn’t say each book ends on a cliffhanger, but Charish knows how to keep readers intrigued with a teaser for the next big thing in the overall plot line at the end of each novel.

The Kincaid Strange series has become an audio-only series for me all thanks to Susannah’s brilliant delivery of the characters. I rarely change the speed of an audiobook when I listen, but I was rushed to relisten to The Voodoo Killings so I could listen to Lipstick Voodoo. After listening to that whole book at 1.25x speed, Susannah’s voices for the returning characters sounded a little off to me at the slower speed. After adjusting the speed I felt like I was listening to the same narrator. After listening to both books, Susannah is now the voice I have in my head for Kincaid and I can’t see myself reading any following books in the series.

My Rating:
Story: B
Narration: B+

Kincaid Strange cannot catch a break. After dealing with a spate of paranormal murders, there’s barely time to recuperate—let alone sleep in—before there’s a new problem in Kincaid’s world of paranormal activity. When her roommate, Nathan Cade—the ghost of a grunge-rocker with a pathological lack of self-control—comes home bound to a dead body, it’s up to Kincaid to figure out how to free him. Ideally before her new mentor, Gideon, a powerful sorcerer’s ghost, discovers that Nate is trapped in the body he’d coveted for himself.

When Aaron, a Seattle cop on the afterlife beat—and Kincaid’s ex—calls her in to help out with a cold case, she takes the chance to mend fences with the police department. The problem: they want to interview Nate’s ghost, which she can’t produce. Then people from Nate’s past start showing up dead, and what’s killing them doesn’t seem to be human. And the way it’s killing them is especially brutal.

Nate’s hiding something, but he’s Kincaid’s friend and she wants to help him. But she also wants to stay alive…