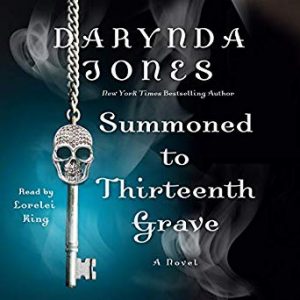 Summoned to Thirteenth Grave is the final book in the Charley Davidson series, so I strongly suggest you not start the series with this title. Overall, this series has been a crazy, enjoyable ride, so if you are interested in Charley’s story, please start with the first book, First Grave on the Right. Beware: series spoilers (but not this book spoilers) ahead…

Summoned to Thirteenth Grave picks up a certain time after the shocking conclusion of the previous book, when Charley was banished from the earthly realm and universe for breaking one of Jehovah’s rules. Without sharing specifics, I’ll tell you that Charley does end up back on Earth just in time to help the gang deal with the hell dimension that is taking over New Mexico. The tear is feeding demons onto Earth, causing people to go crazy, and within days, it will spread across the globe.

There isn’t much I can share about Summoned to Thirteenth Grave without giving away spoilers. While there were some jaw dropping moments, and a couple twists that felt under developed, by-in-large the book wrapped up loose ends that have been dangling for a while. We get closure on most characters’ issues and/or catch a glimpse of their future. The tempo and flow of the story is similar to when the series first started – no extraneous side stories, and I didn’t have to split my attention in too many directions (which was a problem I had with some of the books). The humor is consistent and excellent. The issues I’ve had between Reyes and Charley are gone, and the characters are better for it. I felt a maturity in Charley that has been missing in previous titles.

Narration: This book, like the entire series, is shared via the first person POV of Charley. It is her story, and we are in her brain. Lorelei King, my all-time favorite narrator, continues to capture Charley’s unique and crazy personality, easily jumping from one subject to the next without pause. She has mastered Charley’s sarcasm and sincerity, her passion and her fury. I think the only reason I can keep up with Charley’s ADD lifestyle is due to Ms. King’s masterful performance. And it’s not just Charley, but Ms. King provides a large range of unique voices for every character, making the recording sound like a cast of dozens, rather than one.

Summoned to Thirteenth Grave provides a very good ending to a series I’ve both loved and been utterly frustrated with. The author does a great job bringing outstanding issues to closure. Ms. Jones allows each character some stage time without it feeling forced or contrived. The door has been left open for future tales, and I for one, hope we get them.

My Ratings:
Story: A-
Narration: A+

Charley Davidson, Grim Reaper extraordinaire, is pissed. She’s been kicked off the earthly plain for eternity – which is the appropriate amount of time to make a person starkraving mad. But someone’s looking out for her, and she’s allowed to return after a mere hundred years in exile. Is it too much to hope for that not much has changed? Apparently it is. Bummer.

She’s missed her daughter, she’s missed Reyes, and Beep, but now that she’s back on earth, it’s time to put to rest burning questions that need answers. What happened to her mother? How did she really die? Who killed her? And are cupcakes or coffee the best medicine? It all comes to a head in an epic showdown between good and evil in this final smart and hilarious novel.