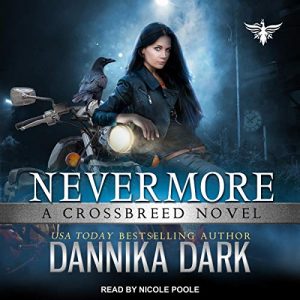 Nevermore is the sixth novel in the Crossbreed series by Dannika Dark and it was as exciting to listen to like all the other installments. Dark is not losing her steam with this world and characters anytime soon!

Nevermore starts days after Blackout with Raven staying with her dad, Crush. Crush is what the Breed world calls a trusted human. A human who knows about the Breed world and is trusted enough to keep those memories. Crush believed that Raven has been dead the last seven years until Blackout.

Once someone is turned into one of the many Breeds who are not born, vampires, mages, and a few others, they have to leave their human world behind, including their families. Now that Crush and Raven are reunited they are catching up on the last few years they missed.

Christian is also catching up with someone from his past, Lenore. She is a thorn in Raven and Christian’s side and I’m so glad that Dark didn’t go the route some authors have in the past with this bitchy vamp. (Swoon-worthy scenes with Christian and Raven!)

While these two connect with their pasts and family, Shepard connects with his lost son, Hunter. The Keystone gang does what they do best, come together as a unit and family to help one of theirs out but this time it’s not on a case but on personal matters with Raven and her dad.

Dark peppers in some clues as to something to come in the continuing series storyline, and I’m sure that Raven has not seen the last of her vampire maker, Houdini.

I cannot rave enough about Nicole Poole’s narration on this and all of Dark’s series. Poole is the reason Dark is an audio-only author for me. She masterly voices all the characters from the female to the male. Her voice for Christian is perfection. I really enjoyed her bring Raven’s dad, Crush to life as well.

My Ratings:
Story: A+
Narration: A+

Raven Black risks it all for loyalty and love in this stunning continuation in the USA Today bestselling Crossbreed series.

Raven returns to her childhood home to rebuild her severed relationship with her father. After a long year of capturing violent criminals and thwarting assassination plots, she could use a vacation.

But trouble is brewing on the home front. When Raven discovers her father is in financial peril, she’s determined to set things right even if it means sacrificing her heart in the process. Meanwhile, her relationship with Christian is on shaky ground when a skeleton falls out of his closet. Will they be able to leave the past behind, or is the trust between them dead and buried

When the bonds of love are put to the test, only the courageous will prevail.