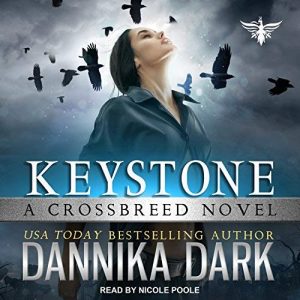 I love the team of Dannika Dark and narrator Nicole Poole. I’ve listened to Dark’s Seven series and own all of her Mageri series (which I will binge listen to by the end of the year). The Crossbreed series is part of the same world, but you don’t have to have read/listened to the other series. I think readers who are familiar with the previous series will feel completely at home because you’ve been introduced to all the breeds in this series. New comers will still feel at home, but without the back history of the world building involving the supernatural races. Have no fear, Dark brings you up to speed on them without an information dump.

Raven Black, the heroine of this series, is special in the breed world because she is a crossbreed. She is a human who has been turned into a half Mage and half Vampire. The breed world looks down on crossbreeds so Raven keeps her mix of Mage and Vampire secret as much as she can. Especially the Vampire side since most breeds do not like or trust vamps. Not even Raven, she hates her vamp side.

In Keystone, Raven goes from a loner rouge to finding a new family with the Keystone group. They are a group of different breeds, from Mage, Chitahs, Shifters, Vampires and more. The group is hired to investigate crimes within the breed world, most of the time working behind the scenes. They are teamed up into two people partnerships. If Raven is selected for the group her partner will be Christian Poe, vampire. There is a sexual tension between them and distrust since Raven doesn’t like vamps.

Keystone is a great start to the Crossbreed series and in true urban fantasy, it also has a slow burn romance building between the heroine and one of her teammates. 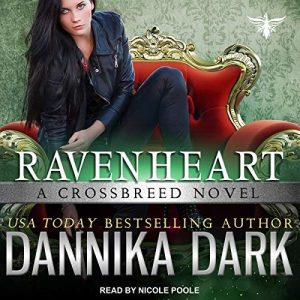 Ravenheart picks up where Keystone ended. Raven is apart of Keystone and learning more about her Mage and Vampire sides. Raven is just full of surprises and her teammates are learning she is more than meets the eye.

The slow burn romance is still building between Raven and Christian. I love the banter they have and some of the key elements of something that happened in the first book are starting to peek through. (Can’t say more without spoilers.)

Another fun adventure with this mixed group of heroes. There was some mystery left open ended about some side characters I believe may have been a crossover from the Mageri series (I’m binging that one SOON!).

Dark and Poole never fail to bring the awesome. Dark writes great characters and Poole is a master at bring them to life with her narration. 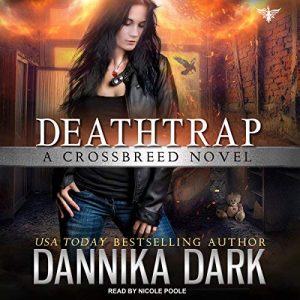 Dark and Poole never fails! This author and narrator pairing is one of the best ones out there. Dark writes great characters and Poole is a master at bring them to life with her narration.

Deathtrap picks up shortly after where Raveheart left off. Raven, Christian and the rest of Keystone group gets a new case to work which leads them to find out more about one of their team members, Shepherd. The case is a good one and Shepherd is not the only one who has to deal with their past. Raven is still dealing with letting go of her human life.

The best thing about the Crossbreed series is the banter between Raven and Christian. Their relationship is a long dance that has no end . . . yet. Deathtrap gets us closer to that end. Their slow burn romance reminds me of Cat and Bones in the Night Huntress series by Jeaniene Frost. The journey to their HEA will be a fun one to experience.

We get a few answers to earlier questions in Raven’s life and more is revealed. Dannika Dark does a great job giving us breadcrumbs to the overall big picture. It will be a long wait for the next book, Gaslight.

Keystone:
Raven Black hunts evildoers for fun, but her vigilante justice isn’t the only reason she’s hiding from the law. Half Vampire, half Mage, she’s spent years living as a rogue to stay alive. When a Russian Shifter offers her a job in his covert organization hunting outlaws, dignity and a respectable career are finally within her grasp. The catch? Her new partner is Christian Poe – a smug, handsome Vampire whom she’d rather stake than go on a stakeout with.

They’re hot on the trail of a human killer who will stop at nothing to get what he wants. One misstep during her probationary period could jeopardize Raven’s chance at redemption, and her partner would love nothing more than to see her fail. Will Raven find the courage to succeed, or will she give in to her dark nature?

Dark secrets, unexpected twists, and a blurred line between good and evil will keep you on the edge of your seat.

Ravenheart:
Two weeks after joining Keystone, Raven Black is ready to take on the world as a criminal hunter for hire. If only her partner wasn’t a bloodsucking Vampire with a penchant for getting under her skin. Despite her lavish surroundings, Raven misses the freedom of life without rules. And Keystone’s next assignment is about to test her self-control in more ways than one.

Dead bodies are popping up in the human district, and all signs point to a Breed serial killer. In order to catch him, Raven and Christian embark on a mission that takes their partnership into uncharted waters. Lives are at stake. Can Raven trust her instincts, or will she fall into a web spun from lies and deceit?

Time is running out in this pulse-pounding tale of dark secrets, murder, and forbidden desires.

Deathtrap:
For Raven Black, hunting criminals is second nature. So is denial. It’s not easy moving forward with one foot stuck in the past. But a new case offers her a much-needed distraction when Keystone accepts their toughest assignment yet—to track down an elusive criminal who’s selling children on the black market.

Their investigation leads them deep into the underbelly of the Breed world, a place both treacherous and enticing. With no room for mistakes, Raven makes a tough decision to lock the door to her past before it interferes with her job. The only trouble? Christian holds the key.

The stakes are high, and a shocking twist turns everything on its head. Will they catch this criminal before more lives are lost? Find out in the latest edge-of-your-seat installment of the Crossbreed series.